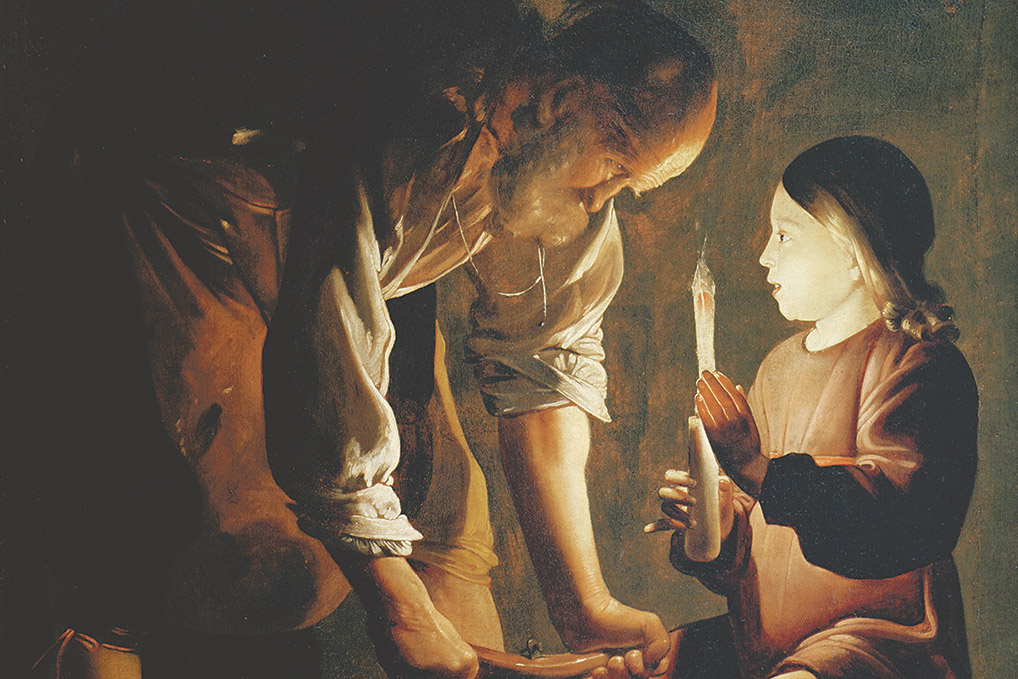 The love of a father for his children and his wife is captured in a four-letter word: with. We see this in the life of St. Joseph, the foster father of Jesus. Even though he is mentioned a number of times in the Gospel accounts of Matthew and Luke, no words of his are recorded. What mattered was that Joseph was there, present to Mary and Jesus, always ready to listen and to encourage, to protect and to provide.

When the shepherds, after hearing the joyful news told them by the angel, hurried to Bethlehem, they “found Mary and Joseph, and the infant lying in the manger” (Lk 2:16). When King Herod “ordered the killing of all the boys in Bethlehem and its vicinity two years old and under,” (Mt 2:13), Joseph was there with Mary and the Child and, at the word of the angel, at once “rose and took the Child and His mother by night and departed for Egypt. He stayed there until the death of Herod” (Mt 14-15).

When Pope Francis writes about fatherhood in his Apostolic Exhortation on love in the family, he begins by mentioning the tragedy today of “a society without fathers,” where “the father figure is said to be symbolically absent, missing or vanished” (AL, #176). He says, “Fathers are often so caught up in themselves and their work, and at times in their own self-fulfillment, that they neglect their families” (Ibid).

Isn’t it interesting that the first way that Jesus revealed the love of God the Father was by coming to be with us? Matthew tells us (Mt 1:22-23), “All this took place to fulfill what the Lord had said through the prophet: ‘Behold, the virgin shall be with child and bear a son, and they shall name him Emmanuel,’ which means ‘God is with us.’”

Matthew also tells us that the last words that Jesus spoke to His Apostles after His Resurrection and just before ascending into heaven were the following (Mt 28:19-20): “Go, therefore, and make disciples of all nations …. And behold, I am with you always, until the end of the age.”

When Pope Francis speaks about the pastoral care needed in the Church for persons in broken families, he underlines the need to be with them (AL, #291), “… the Church must accompany with attention and care the weakest of her children, who show signs of a wounded and troubled love, by restoring them hope and confidence, like a beacon of a lighthouse in a port or a torch carried among the people to enlighten those who have lost their way or who are in the midst of a storm.”

A father who is determined to be present naturally fulfills two key aspects of fatherhood’s mission and task: life-giving and protecting. In a homily given to priests, the Holy Father said, “All of us, to exist, to become complete, in order to be mature, we need to feel the joy of fatherhood: even those of us who are celibate. Fatherhood is giving life to others, giving life, giving life …” (Homily, June 26, 2013). As the pope’s repetition, “giving life”, suggests, this life-giving essence of fatherhood in a family only begins in the conjugal act and the conception of children. Children throughout their lives count on a fatherly life-giver, one who comes to them with concern, correction, advice, affection and encouragement when the way of life is confusing.

A father’s determined presence also provides the invaluable gift of protection in a world where the spiritual battle rages in both obvious and subtle ways. A father must be committed to the protection of his wife and children from all dangers, including one’s own weaknesses. Pope Francis, as he began his pontificate, spoke of St. Joseph as a strong protector and open-hearted father. He said, “… protecting demands goodness, it calls for a certain tenderness. In the Gospels, St. Joseph appears as a strong and courageous man, a working man, yet in his heart we see great tenderness, which is not the virtue of the weak but rather a sign of strength of spirit and a capacity for concern, for compassion, for genuine openness to others, for love. We must not be afraid of goodness, of tenderness!” (Inaugural Homily, March 19, 2013).

What a victory it would be for the family and the Church if we fathers set our faces like flint to develop the masculine virtues in such a way as to be life-givers and protectors in today’s fatherless society! Fathers, this is a work of art that the world needs. Even if hidden from the world like St. Joseph, your Father in Heaven who “sees in secret” will not forget your commitment to be with your wife and children.

As we celebrate Father’s Day 2016, we give thanks to our heavenly Father for watching over all of us as His beloved sons and daughters, and for sending us His only begotten Son to be with us always. With grateful hearts, we also lift up to Him our Dads and Granddads, living and deceased, giving thanks for them and commending them to His merciful care.