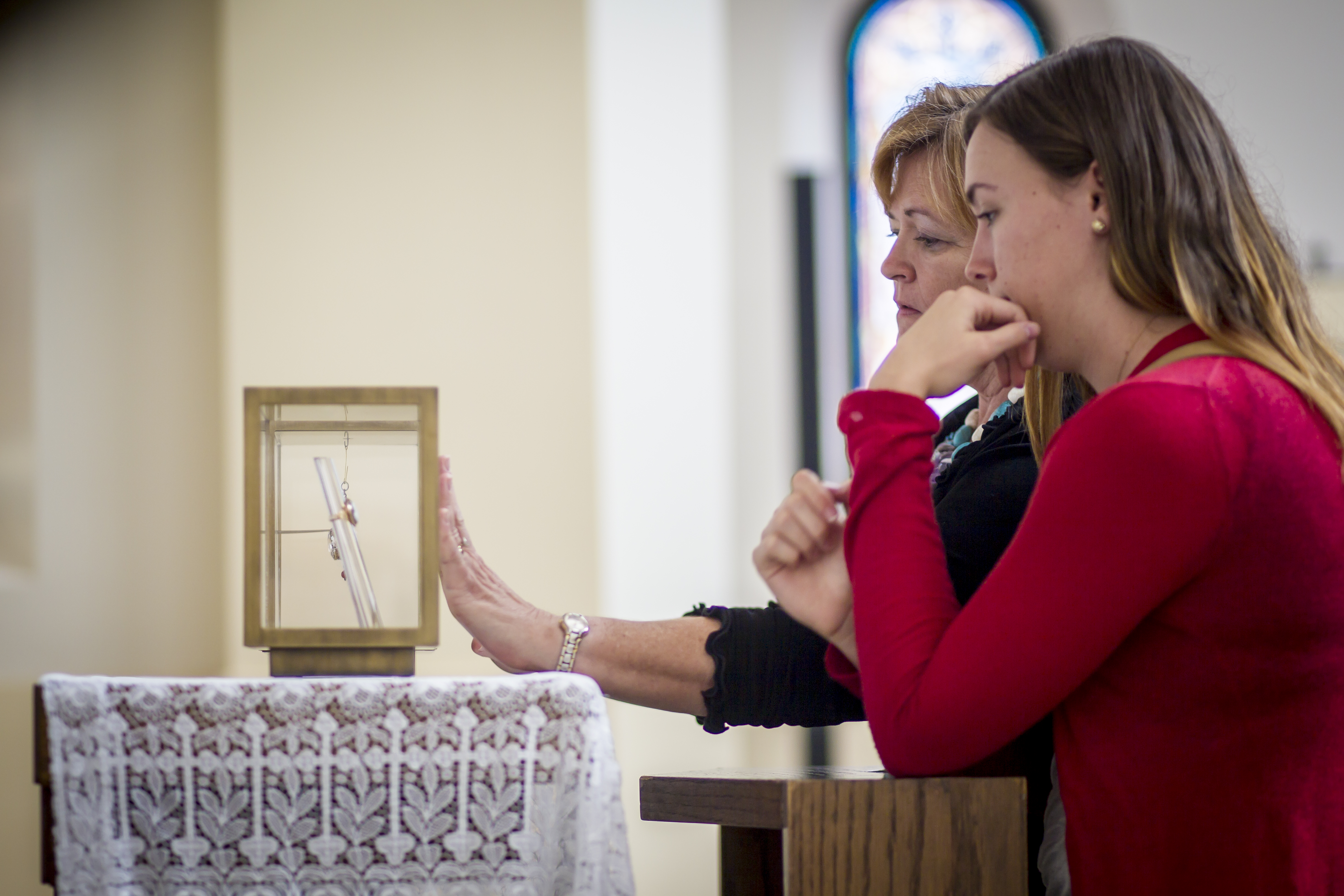 The opportunity to honor two heroes of religious of freedom drew a standing-room only crowd to a Mass at St. Mary’s Basilica June 30.

The relics of St. Thomas More and St. John Fisher, two 16th-century Catholics beheaded for their Catholic faith, were on display for veneration as part of a nine-city, cross-country tour during the Fortnight for Freedom, a two-week period that highlights the importance of defending religious freedom.

Bishop Thomas J. Olmsted, who presided at the noon liturgy, told the faithful that neither saint wanted to be a martyr, but were not surprised that fidelity to Christ came at a steep price. Both men refused to pretend that King Henry VIII — rather than the Successor of St. Peter — could be the head of the Church in England.

“No matter the cost to themselves, they would not betray a well-formed conscience, would not act contrary to the truth they knew by faith in Christ,” Bishop Olmsted said.

And though the two martyrs lived some 400 years ago, their heroic witness is needed more today than ever before in U.S. history, as Americans face “an assault on religious liberty from forces within our own country that is unprecedented and constantly on the increase,” he said.

Mike Phelan, diocesan director of the Office of Marriage and Respect Life, agreed. The Supreme Court’s June 28 decision to let stand a ruling by the Ninth Circuit Court of Appeals that pharmacists must fill prescriptions for abortifacient drugs was evidence of an erosion of conscience rights.

“The decision against the conscience of the pharmacists is a huge wakeup call that major decision-makers in our country did not care about conscience at all, particularly religiously motivated conscience. It’s becoming very clear that this is an emergency,” Phelan said.

It was a point hammered home by Nik Nikas, president, CEO and general counsel for the Bioethics Defense Fund, who gave the keynote address at the luncheon following the Mass.

Nikas fleshed out a few details of the case involving Kevin Storman, a Washington-state pharmacist who sought a religious freedom exemption from a regulation that required all pharmacists to fill any prescription, including those that induce abortion. Storman won the case in federal district court but lost in the Ninth Circuit.

Navigating these hostile waters, rife with antipathy for religious freedom, is not for the fainthearted. Nikas emphasized the deep faith and authentic Christian witness of Ss. More and Fisher that empowered them to stand strong in their convictions, even in the face of death.

“If we fail to fan the embers of our faith into a blazing fire, the secular culture will assume ours is just a private hobby, like stamp collecting,” Nikas said.

Quoting from the U.S. Conference of Catholic Bishops, he outlined current threats against religious liberty and conscience, including: government mandates for sterilization, contraception, and abortion-inducing drugs; forcing religious institutions to facilitate or fund such insurance coverage contrary to their own moral teaching; and threats against Catholic foster care and adoption services, that will lose their licenses or forfeit government contracts, or both, unless they place children with same-sex couples or unmarried opposite-sex couples who cohabit.

Nikas also referred to a June 21 declaration by the U.S. Department of Health and Human Services that the California Department of Managed Health Care can continue to force all health plans under its jurisdiction to cover elective abortions.

In an interview with The Catholic Sun, Ron Johnson, executive director of the Arizona Catholic Conference, the public policy arm of Arizona’s Catholic bishops, emphasized the need for Catholics to get involved in the public square.

“We are facing an incredibly difficult time in our country right now,” Johnson said. “Catholics need to educate themselves on the issues and hold people accountable on those issues. Make sure you vote.”

After the luncheon, attendees stood in a line that snaked through the Diocesan Pastoral Center where the relics of Ss. Thomas More and John Fisher were placed on display.

Ellen Sweeney, a longtime pro-life advocate, was one of those waiting in line. It was her first trip out of the house after surgery. Nothing, she said, would have stopped her from venerating the relics.