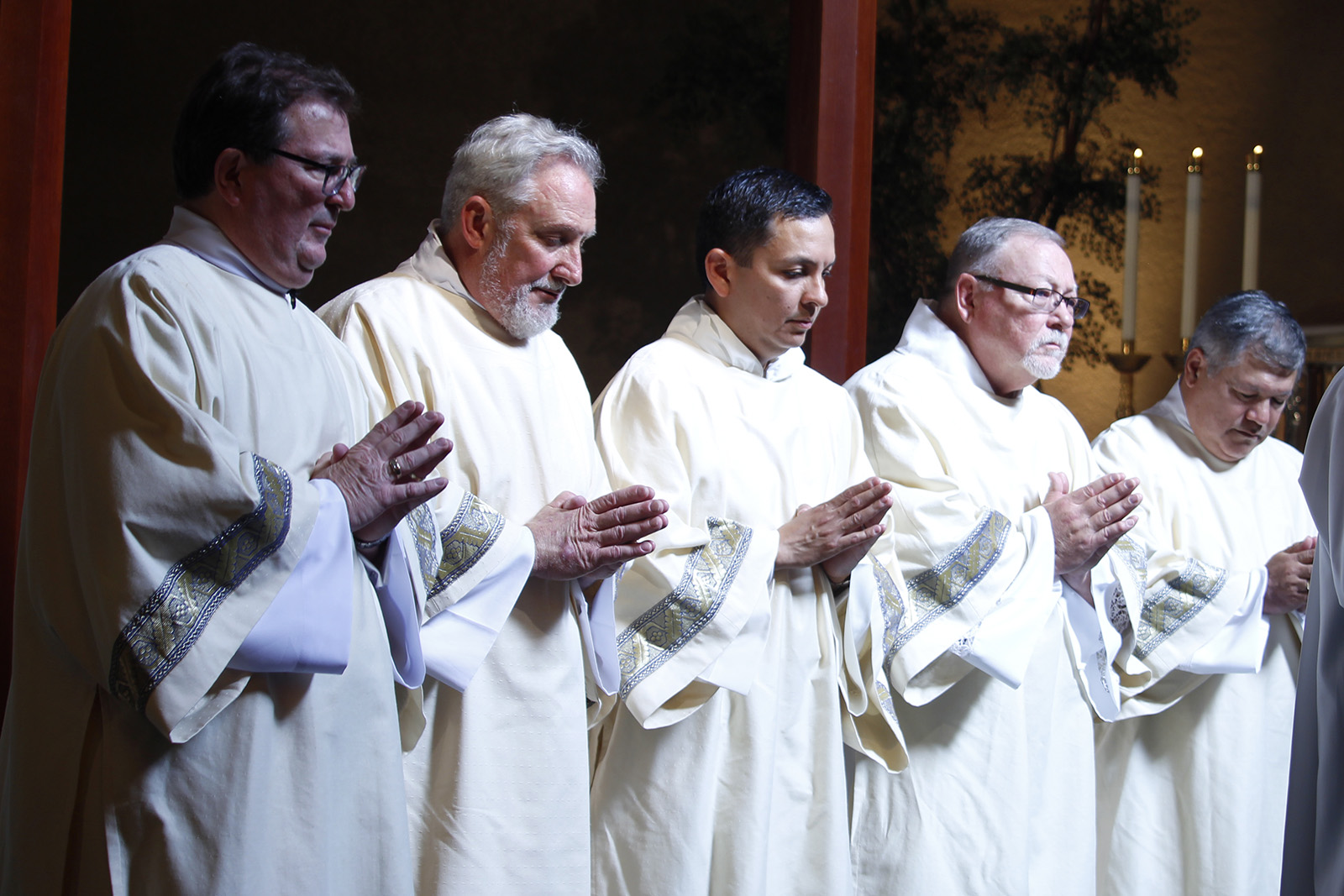 “I can’t believe I got that letter from the bishop — that he’s calling me to ordination. I’m still kind of in awe that I’ve been called,” Dcn. Tony Smith said.

That letter formally wrapped up a five-year formation process plus two years of academic preparation through the Kino Catechetical Institute prior to that. His call to holy orders was one of five that became a reality when Bishop Thomas J. Olmsted ordained the men to the permanent diaconate at Ss. Simon and Jude Cathedral Nov. 5.

Dcns. Billy Chavira, Christopher Giannola, Gary Scott, Marvin Silva and Tony Smith began serving at local parishes — largely their own — the following day and in the community the same week. Ordained deacons carry out a service of the Word, the altar and charity.

Dcn. Silva looks forward to praying for the sick and giving Communion to those at the county hospital. He knows his ordination strengthened him for such work. Dcn. Silva was among many deacons and their wives who pointed to the bishop’s laying on of hands as a powerful moment.

“When he was laying his hands on me, I felt something marvelous — pouring the Holy Spirit over my head,” said Dcn. Silva, who will also serve at St. Mary Parish in Chandler, particularly during the weekly televised Mass in Spanish. The father of three and guitarist has roots in both Nicaragua and Canada.

“At a time in our nation when many of our family members … and many of our friends and neighbors are falling away from the practice of our faith, and when many others have lost confidence that they could do something great for God, the Lord Jesus is filling you with the joy of the Gospel and the grace of diaconate ordination,” Bishop Olmsted said in his homily. He cited the early martyrs St. Stephen and St. Lawrence as models.

Deacons can also baptize the faithful and assist at and bless marriages. The Giannola family knows that intimately. Dcn. Giannola’s father-in-law, also a deacon, officiated his marriage to his wife, Mary, decades ago and baptized and gave Communion to every family member until his death.

Mary cherished the chance to help vest her husband with his alb prior to Mass. She also liked that the litany of the saints allowed ordinands to be spiritually united with loved ones who have passed on. She said that was important to her husband.

Dcn. Giannola was eager to answer the call to greatness that Bishop Olmsted preached about. It’s achieved by being a strong witness to marriage and family life to the world, he said.

Bishop Olmsted described the desire to do great things as “a sign of the Holy Spirit at work within the soul. These are qualities I look for in candidates for the ministry of deacons. But they are not common in society today and they were not common in Jesus’ day. Jesus warned His first disciples to reject a counterfeit greatness.”

Dcn. Giannola, in brief remarks to the crowd during the ordination reception, credited the formation process for helping him strive for true greatness. People already seek him out for spiritual advice, questions and support, his wife said.

Penni Scott, whose husband Gary was also among the ordinands, sees similar qualities in her husband.

“He loves to talk with people, interact with people and help make their lives better,” she said.

That’s a big part of why lining up and processing into the cathedral at the beginning of Mass was so moving for Dcn. Scott. He had a chance to see and hear nearly everyone there united in prayer for him and his fellow ordinands.

They processed in and joined their families in the pew, but only for the first part of Mass. They spent the remainder at the altar and lying prostrate down the center aisle. That moment was powerful for Dcn. Chavira.

“When you’re in a physical position of complete surrender, it gives you inner peace knowing the whole Church is praying for you,” Dcn. Chavira said. When he stood, he was less nervous.

His wife, Maria, also keyed in to the laying on of hands and the history of what the Church has established through that. She, like many of the deacons’ wives, sees her husband’s servant heart.

“It’s just an extension of what he already does — serving the people of God through the ministry of the Church,” she said.

Sesmia Trujillo, Dcn. Chavira’s religious education teacher in first grade at St. Anthony where he grew up, agreed. She and her mother were among many people who came from different parts of his life, even if they weren’t Catholic, because they understood what the faith meant to him.

“This is just one step further in his spiritual journey as well as his professional one,” Trujillo said.

The entire liturgy was emotional for Isolda Silva and Diana Smith, both deacon wives, especially when Smith’s husband offered her the chalice at Communion. The couple teared up a bit. Silva described her husband’s ordination day as a beautiful dream she didn’t want to wake up from.

Dcn. Jim Trant, director of the diaconate, encouraged the crowd at the reception to support the new deacons in their ministries. They have given themselves over to God and rededicated themselves to their families, he said. “You are looking here at five saints in the making.”