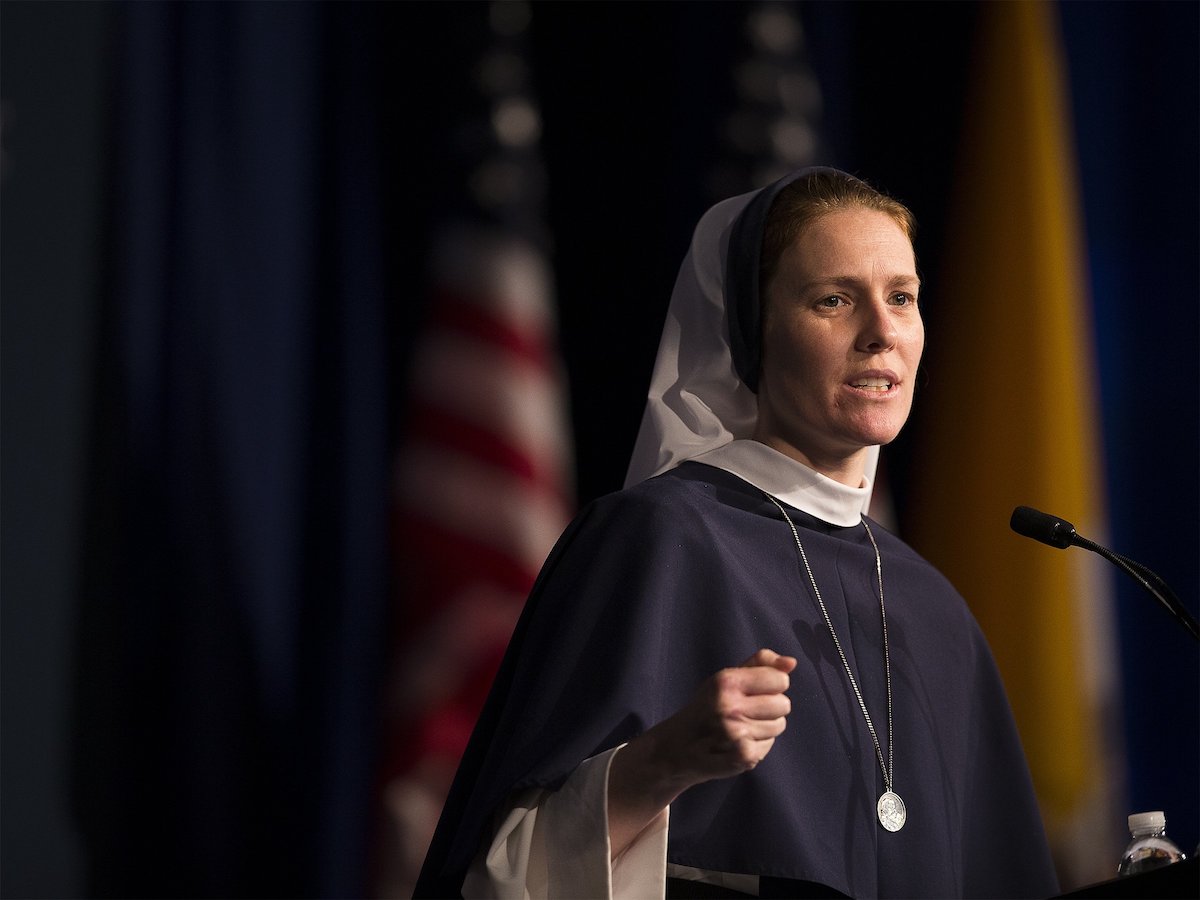 WASHINGTON (CNS) — Sister Bethany Madonna of the Sisters of Life opened the first day of the GIVEN Institute’s annual Catholic Young Women’s Leadership Forum with a keynote titled “Casting the Vision,” a reflection of her work in GIVEN and a strong reference to the concept of the entire forum.

The first day was centered on introductions and providing a meaningful start to a short journey toward the understanding of the importance of femininity in the Catholic faith, while simultaneously realizing it is a gift from God.

Sister Madonna spoke about the three themes encompassing the June 9-13 gathering, held at The Catholic University of America in Washington.

“Receive the gifts you are” was the first theme. She explained that many women, including some who may have been at the forum, don’t realize God invites them into his arms. To receive one’s gifts from God, everyone must be accepting of his presence in our lives.

The second theme was to “realize the gifts you’ve been given.”

“God actualizes our gifts, we have to acknowledge them, and the only way to do so is through God,” Sister Madonna said.

To convey this theme, Sister Madonna quoted St. Francis of Assisi: In a time of confusion about his own faith, he asked: “Who are you, Lord, and who am I?”

She told the women at the GIVEN forum to similarly ask God what he has in his hands for all individuals. He invites and loves each person first by actualizing their unique gifts, but will wait for love and acknowledgment in return, she said.

The final theme was to “respond with the gift only you can give.” Each person’s gifts are distinctive and personalized, and God’s plan includes unique vocations for all. Some are meant to do more than others, but to fulfill the vocation, fortitude is required, Sister Madonna said, using the example of white and red martyrs: White martyrs stand for God without shedding blood, while red martyrs shed blood.

Most Catholics are called to white martyrdom, which does not demean its importance, she explained. Facing hardship to reach God is an essential part of all faith journeys.

Each woman at GIVEN, and outside of GIVEN, is called to express her unique gifts for the sake of the Lord.

The annual GIVEN Forum is meant to build a path toward personal initiative and faith for women at all different levels of their religious journeys.

With a combination of talks, Masses, adoration, mentoring groups, leadership training, small group discussions, the five-day event is “designed to help young adult Catholic women with a heart for mission and an aptitude for leadership identify their particular gifts and find practical pathways to put them in the service of the Gospel,” as stated on the GIVEN website.

For this year’s forum, the institute accepted 130 young adult women between the ages of 21 and 30 as attendees. They came from 35 states, the District of Columbia and Puerto Rico and represented 91 dioceses across the United States. Others came from Canada, Mexico, the United Kingdom, Peru, the Philippines, Singapore and Kenya.

By bringing together religious sisters and laywomen, speakers and mentors, and those searching for more — from all paths of life — the forum helps the women to work off of each other to find action plans for the future of their relationship with God, according to organizers.

The forum included 60 religious sisters from 20 congregations, representing a wide variety of apostolates and charisms in the church. The 30 laywomen serving as mentors included mothers, business women, teachers, health care providers, lawyers, entrepreneurs, coaches, artists, engineers — many of whom are parish and community leaders.

When asked what GIVEN meant to her, Cynthia Psencik, a mentor from the Archdiocese of New York, said: “To be able to be present in a crucial time in the life of young women, where they’re questioning where they are, where is God calling them … being that assuring and affirming presence.

“GIVEN as an organization can provide this platform where women can journey together wherever we are.”

Susie Lopez, a first-time participant from Houston, talked about how Sister Madonna relayed her message in her speech.

“Sister Bethany spoke about the particularity of each woman and her gifts,” Lopez told Catholic News Service. “It is something that so often, we as women, try to compare (each other). … Her calling that out, particularly for me, is a strong thing that I think we all could lean into.”

Madi Abbott, another first-time participant, from Kansas City, Kansas, said Sister Madonna relayed her message by speaking about the feminine genius. “Sister Bethany casted the vision for the whole entire conference … so often, we (women) as leaders give and give and give, but we forget to receive. We begin the conference with the idea of receptivity.”

“I think my favorite part was the overarching sense I received from (Sister Bethany’s) talk, which was that we can think about giving our gifts as if we are giving them and then there will be a response afterward,” said Sister Mary Gabriel of the Sisters of Life. “The thread through the talk was that before we even think about it, everything we do is in relation.”

Sister Madonna’s introductory words touched women from multiple religious paths and expressed her work through GIVEN and her vocation to help these women.

Learn more about the GIVEN Institute and the 2021 GIVEN Forum.