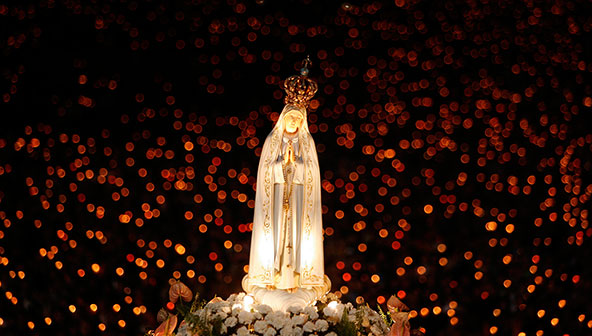 Today I would like to write about our upcoming Arizona Rosary Celebration and my thoughts about Our Lady’s apparitions. It is significant, perhaps even providential that the committee of the Arizona Rosary Celebration chose months ago to honor Our Lady of Fatima at this yearly event, because Oct. 13, 1917 was the last day Our Lady appeared to more than 70,000 in rain soaked Fatima. It appeared that the sun was spinning from the sky to earth and instantly the area was dried. It is referred to as the Miracle of the Sun.

Then, this past March our newly elected Pope Francis dedicated his papacy to Mary under her title of Our Lady of Fatima. Pope Francis is having the statue of Our Lady of the Rosary of Fatima flown from the Little Chapel of Apparitions in Fatima, Portugal to Rome and there will be two days of ceremonies, just as we have in Arizona — in Tucson and in Phoenix. On Oct. 13, the pope will consecrate the world to Jesus through Our Lady, during Mass before her statue in St. Peter’s Square.

So, on Sunday, Oct. 13 let us be at the Phoenix Convention Center honoring Our Lady of Fatima and seeking her powerful intercession for our families, our country and the world on the 96th anniversary of her appearance at Fatima. Let us give witness to our faith in the Year of Faith by bringing our family and friends to this Rosary celebration that has become a tradition in our diocese. The Tucson Rosary Celebration is Saturday, Oct. 12 at Elizabeth Ann Seton Parish.

I think it would be nice to recall that Our Lady of Fatima is a title given to the Virgin Mary, based on apparitions of her to three shepherd children, Lucia Dos Santos, 9, and her cousins, Francisco, 8, and Jacinta, 6. The apparitions occurred on the 13th day of the month for six consecutive months. However, there were first three apparitions by an angel.

During the first apparition of the angel, the three children were tending their sheep when it started raining and they ran into a cave. The angel said, “Fear not! I am the Angel of Peace. Pray with me.”

During the second apparition, the angel said, “I am the Guardian Angel of Portugal. Offer prayers and sacrifices continually.”

During the third apparition, the angel had in his hand a chalice over which hung a host, from which drops of Blood fell into the chalice. He repeated three times with the children: “Most Holy Trinity — Father, Son, and Holy Spirit — I adore thee profoundly. I offer thee the most precious Body, Blood, Soul and Divinity of Jesus Christ.”

On Sunday May 13, 1917 the children were pasturing their flock as usual, when a bright light pierced the air. A lady was standing there dressed in white. “Fear not! I will not harm you.” she said. “Where are you from?” the children asked. “I am from heaven” the beautiful lady replied.” I want you to come here for six months on the same day at the same hour. Recite the rosary every day for peace.”

During her second apparition, the message was to pray, make sacrifices and to say the rosary.

As Our Lady spoke during her third apparition, she stretched out her hands and bright rays came forth which seemed to penetrate into the earth. All at once the ground vanished, and the children saw hell. Frightened they lifted their eyes to the Lady who told them “You have seen hell, where the souls of poor sinners go. To save future souls God wishes to establish in the world the devotion to my Immaculate Heart. If people do what I tell you, many souls will be saved.”

“Do you want to learn a prayer?” Mary asked. “Yes we do!” the children responded. “When you recite the Rosary, say at the end of each decade: Oh my Jesus, forgive us our sins, save us from the fires of hell, and lead all souls to Heaven, especially those in most need of Your Mercy.”

In August the children were prevented by the civil authorities to go to the 4th meeting on the 13th. Finally on Aug. 19, while they fed the flock, they saw the Lady who said “I want you to continue see me on the 13th, and continue to say the rosary every day. I, in the last month will make the miracle that all will believe.” Then with a sad appearance told them: “Pray a lot and offer sacrifices for sinners. Many souls go the hell because there is none who pray for them.”

On Sept. 13 the children and about 30,000 people recited the rosary, and Our Lady appeared for the fifth time saying: “In October the Lord, Our Lady of Sorrows, the Lady of Mount Carmel, and St Joseph with the child Jesus, will come to bless the world. God is glad of your sacrifices.”

On Oct. 13, 1917 the children were surrounded by a crowd of 70,000 persons under a torrential rain. During her sixth and last apparition in Fatima, Our Lady said, “I am the Lady of the Rosary. I desire a chapel in my honor to be built here, and that people continue to recite the Rosary every day.” Lucy asked: “If I ask you for cures and conversions, will you grant them?” Our Lady responded, some yes, others no. It is necessary that they ask pardon for their sins, that they don’t offend God, our Lord. “Do you want anything else from me?” Lucy asked. “I do not want anything more,” Mary responded.

Then she opened her hands and the promised sign happened. There appeared a bright sun, which began to turn, projecting bands of color that lit the clouds, the sky, the trees, and the crowd. Suddenly it looked as if it would fall on the crowd and they fell to their knees. Meanwhile the children saw a Lady dressed like the white of the sun with a blue cape and St. Joseph with the Child Jesus. They saw the Lord bless the world. The people then became aware that their clothes were dry. The miracle she had promised had come to be.

Let us be part of the Rosary Celebration in either Tucson and Phoenix, Oct. 12 and 13.