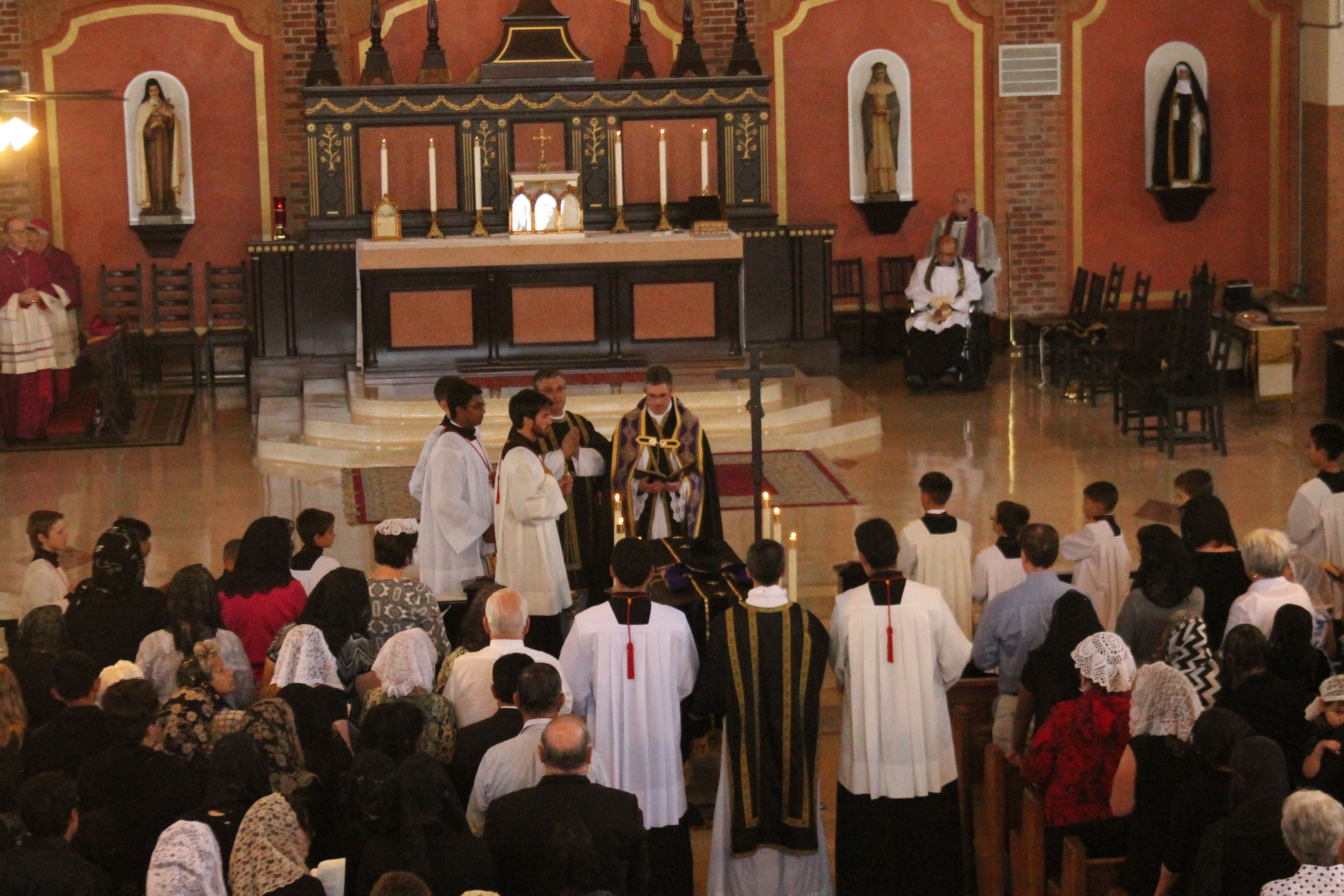 The 28-year-old priest was murdered June 11 in an incident that left another priest critically injured at the rectory of the church that stands in the shadows of the state capitol buildings.

Phoenix police announced hours before the Mass that they have a suspect in custody for the crime.

Gary Michael Moran, 54, a transient who was released from prison in April, was arrested June 15 at 9 p.m. at a psychiatric treatment center some four miles northwest of Mater Misericordiae Mission.

Phoenix police chief Daniel Garcia said the attack on the two priests was a “horrific crime” and that the department felt an urgency to find the perpetrator.

Garcia, along with Phoenix Mayor Greg Stanton and other city officials, attended the requiem Mass prior to a noon press conference at police headquarters. Garcia noted that the Catholic community had “come together as a family to support each other” in the aftermath of the attack.

“I’m very pleased we were able to make this arrest,” Garcia said. “We wanted to bring closure as quickly as possible in this case.”

Moran has a long history of criminal activity, police say, including arrests for assault, burglary, prohibited possession of a weapon, theft of a vehicle and illegal drugs. He was released from jail in April after serving more than 85 percent of his sentence for burglary and aggravated assault.

The judge set Moran’s bail at $1 million cash only.

At the time of his arrest, Moran was in a wheelchair, but police do not believe he is wheelchair-bound. According to police, Fr. Terra and Fr. Walker did not know Moran.

Garcia said there was no warrant out for Moran’s arrest, but that members of the community came forward via the Silent Witness program and offered information that led to the arrest.

Moran made admissions about the attack on the priests during his interrogation by detectives but ultimately invoked his right to an attorney.

“We believe this was a crime of opportunity,” Garcia said.

Fr. Terra, police said, heard a noise outside the rectory and opened the door to investigate, only to be attacked. Fr. Walker heard the melee and came from his room. That’s when the suspect allegedly shot him.

Police say that Fr. Terra was beaten with an angled iron during the assault and that the gun used in the murder belonged to Fr. Terra. Moran was able to overpower Fr. Terra and take the weapon from him.

At the requiem Mass, Fr. Eric Flood, the North American superior of the Fraternity of St. Peter Society, the religious order Fr. Walker belonged to, spoke about the young priest’s love of celebrating Mass.

“If someone were to ask him if he would still want to be priest if he knew he would someday be killed, he would probably say yes,” Fr. Flood said, “even to say Mass just once.”

He also offered what he said would be Fr. Walker’s advice to the killer.

“His advice would probably be that he should grow in his friendship with God. Fr. Walker would say that there was a thief crucified alongside Christ, and our Lord turned to him and said, ‘This day you will be with Me in Paradise,’” Fr. Flood said.

Fr. Joseph Terra, in spite of his severe injuries, attended the requiem Mass where he sat in a wheelchair near the altar. His arms were bandaged and he kept his head lowered throughout the service that was celebrated in Latin. The faithful of Mater Misericordiae Mission gather daily for the Tridentine Mass.

Bishop Thomas J. Olmsted of the Diocese of Phoenix offered his condolences to the community at the loss of Fr. Walker.

“His two years of being a priest were a blessing to all of us,” Bishop Olmsted said.

He also spoke to the many priests gathered for the somber Mass.

“We feel a great fraternal love and great closeness to one another as we work together to serve Christ and His Church,” Bishop Olmsted said. “We’ve lost a beloved brother.”

In spite of the tragic loss, Bishop Olmsted offered words of hope. Jesus, by His death, overcame death, the bishop said. Christ is not only the perfect High Priest, He is also the innocent Victim, just as Fr. Walker was an innocent victim of a violent crime.

“He fell asleep in Christ and awaked into the loving arms of his Savior, and with that hope we go forward honoring him and seeking ourselves to be faithful followers of Christ,” Bishop Olmsted said.

At the press conference held at police headquarters, Phoenix City Councilman Michael Nowakowski said he believed Fr. Walker would want the community to come up with a plan to help those recently released from prison to reintegrate into society. Moran was splitting the time since his arrest between living on the streets and in shelters.