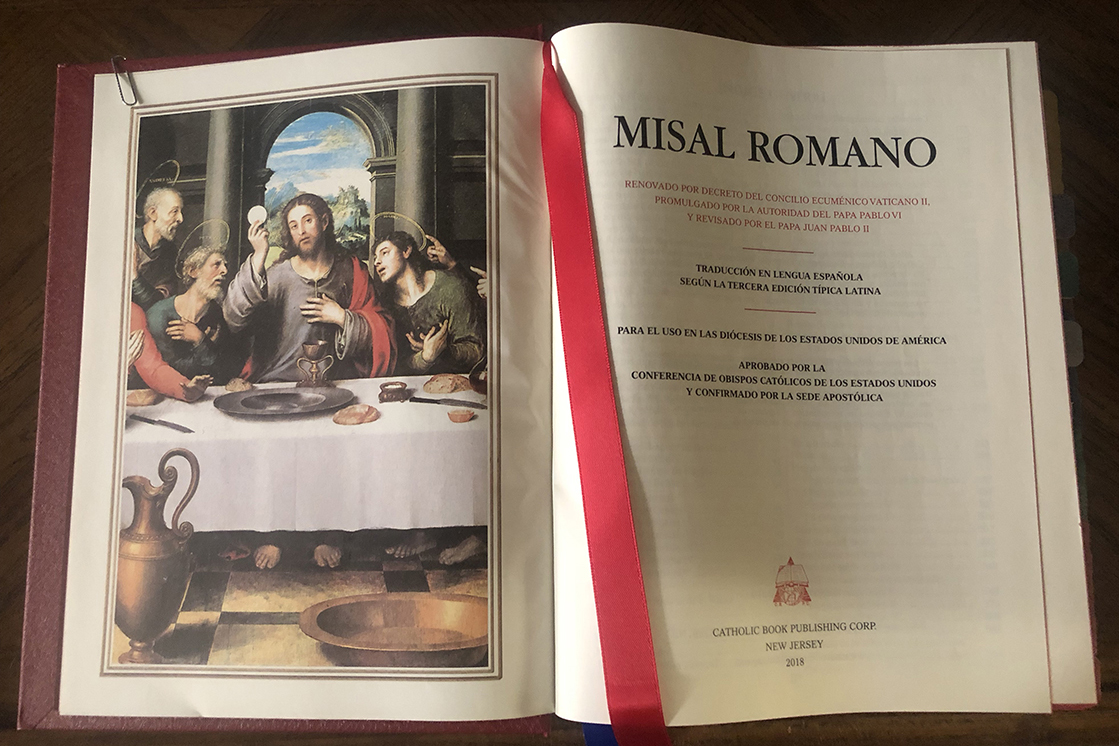 Seven years after the Roman Missal was introduced with a new English translation, Spanish-speakers in the United States now have a Roman Missal in their own language that at the same time is uniquely American.

“According to the norms established by the Holy See, this edition of the Roman Missal is declared the approved definitive Spanish translation of the ‘Missale Romanum,’” wrote Cardinal Daniel N. DiNardo of Galveston-Houston, president of the United States Conference of Catholic Bishops (USCCB) in a decree of publication.

Priests were able to begin using the new missal, which is the third edition, this year during the Feast of Pentecost, but the mandatory start date is the upcoming First Sunday of Advent, Dec. 2.

Why a new missal in Spanish?

Before, there hadn’t been one single Roman Missal in Spanish. Many of the parishes in the Diocese of Phoenix use the missal from the Mexican Episcopal Conference, but it wasn’t used universally. In other parts of the United States, parishes use Missals from other Latin American and Spanish-speaking nations.

Fr. Lucatero, who is a priest of the Archdiocese of San Antonio, was in Phoenix with the Federation of Diocesan Liturgical Commission June 25 to give a presentation on the new presentation.

Dcn. Marvin Hernández, who serves at St. James the Greater Parish in Glendale, attended the presentation and said that it’s important to have a missal that unites the Spanish-speaking community.

“We come from different nationalities — for example I was born in Guatemala, and I know Mexico and Central America and the northern part of South America and y many of us have different celebrations,” said Dcn. Hernández. “But even knowing and validating all of those celebrations in the Missals that we have from our own countries, the United States brings us together, and it’s becoming very important that the bishops are trying to unite the people more.”

Fr. Lucatero said that it’s also an opportunity to form the faithful about the Eucharist, because the Eucharist “is the center.”

It’s not coincidental that part of this summer’s Gospel readings is from John 6’s exposition on the Eucharist. Fr. Gregory Labus, a priest of the Diocese of Brownsville who accompanied Fr. Lucatero, said that it provides an opportunity to introduce the new missal in the parish “just to get people thinking, ‘why am I here? what do we do? Why is this important?”

One thing introduced in the new missal are the propers for days especially for the United States that can’t be found in Missals from other countries.

“For our Spanish congregations, the new American Spanish Missal provides prayers for national holidays, like Independence Day and Thanksgiving, and the collects for saints particular to the American Church, such as Mother Seton,” said Fr. Kieran Kleczewski, director of the Diocese of Phoenix Office of Worship.

Another part that’s different is the use of the familial “ustedes” address, in place of the formal “vosotros” address.

Also important are the chants of the Mass, said Fr. Labus. Referring to the document “Sing to the Lord.” Fr. Labus worked on the new chants for the liturgy.

“The other thing is finding music that’s going to be more of a chant style, encouraging that to be part of the repertoire … because the voice is the primary instrument,” said Fr. Labus. “They’re based on the historical chants of the Church, it’s part of our tradition.”

Mariza Galache, music director for St. Augustine Parish, attended a presentation specifically for music directors and said she came to be able to serve better.

“All of liturgical music is an essential and important part in the community,” she said, “so, if we can be well informed about eh liturgy and how to combine it with the music, I think it’s the best way to help”.