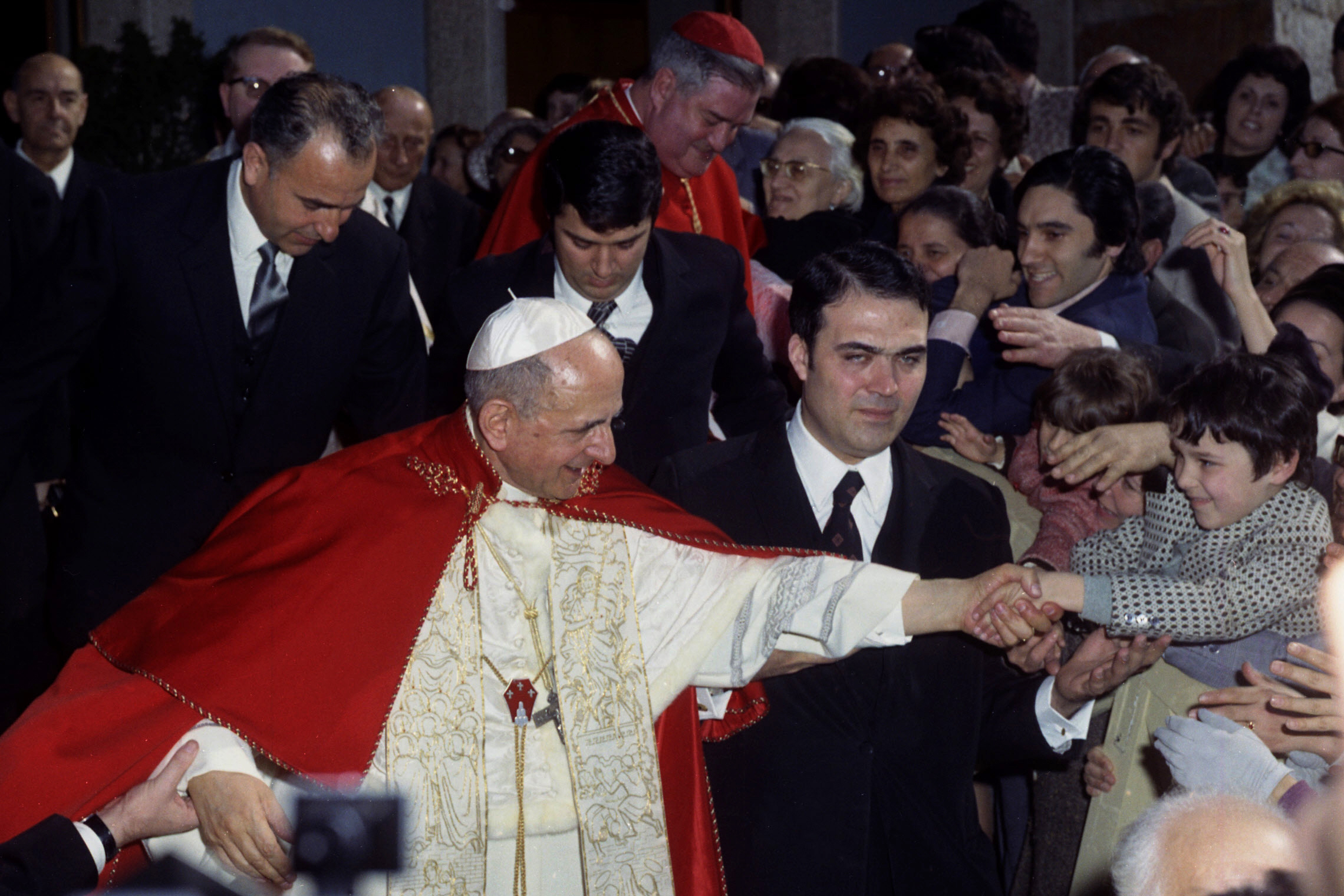 WASHINGTON (CNS) — Fifty years ago, an encyclical was released affirming a long-held teaching of the Catholic Church, yet it became one of the most controversial encyclicals in recent Church history.

Soon-to-be St. Paul VI’s encyclical “Humanae Vitae (Of Human Life)”, subtitled “On the Regulation of Birth,” reaffirmed the Church’s moral teaching on the sanctity of life, married love, the procreative and unitive nature of conjugal relations, responsible parenthood and its rejection of artificial contraception.

Blessed Paul, who will be canonized Oct. 14 by Pope Francis during the Synod of Bishops on Youth, said in “Humanae Vitae” that the only licit means of regulating birth is Natural Family Planning. In the document, he asked scientists to improve NFP methods “providing a sufficiently secure basis for a regulation of birth founded on the observance of natural rhythms.”

At the time of its release, it was greeted with protests and petitions in the U.S. and Europe. But the 50th anniversary has been marked by conferences, lectures and academic discussions as theologians, clergy, family life ministers and university professors have explored what its teachings mean for the 21st-century Church.

Blessed Paul issued “Humanae Vitae” as artificial contraception, particularly the birth control pill, began to become commonplace. In the United States, the Food and Drug Administration approved the use of Enovid — the pill — in May 1960.

Initially, many thought the pope might support the use of artificial contraception, especially after a majority of members on a papal commission studying the issue approved a draft document in 1966 endorsing the principle of freedom for Catholic couples to decide for themselves about the means of regulating births.

The majority report proposed that artificial birth control was not intrinsically evil and said under specific circumstances, Catholic couples could use contraceptives in good conscience. It was supported by 64 of the 69 commission members who voted on it, including nine of its 16 episcopal members.

Then Cardinal Karol Wojtyła, who would become Pope St. John Paul II, was a member of the commission and sat on the minority that upheld the Church’s traditional teaching.

The majority report was intended for the pope only, but it was leaked to the press, which heightened expectations of a major change in Church teaching.

The report left out the sacramentality of marriage and the vocation to holiness, said Katrina Zeno, coordinator for the Diocese of Phoenix’s John Paul II Theology of the Body Resource Center.

Blessed Paul rejected the majority’s recommendations and, instead, decided to uphold traditional Church teaching on artificial contraception. The text of the document thanked the commission experts but added that the pope thought its proposed solutions “departed from the moral teaching on marriage proposed with constant firmness by the teaching authority of the Church.”

Before the encyclical, Zeno said, the development of a theology of conjugal love had been contractual and juridical. “Humanae Vitae” is “a deepening of our theology of marriage,” she said. “Conjugal love is ordered to the perfection of the spouse.”

Opposition to the encyclical erupted throughout the Church after the document’s release. Some clergy in the U.S. and Europe openly voiced disagreement and thousands of lifelong Catholics left the Church.

Among the most prominent opponents were 87 teaching theologians from American seminaries and Catholic universities. They responded with their own statement, arguing that because the encyclical was not an infallible teaching, married couples in good conscience could use artificial contraception and remain faithful Catholics.

Fr. Charles E. Curran, then an associate professor of theology at The Catholic University of America, was one of the most visible U.S. leaders of the group who opposed the teaching.

An attempt by Catholic University officials in spring 1967 to dismiss Fr. Curran for his stance that Catholics could dissent from the Church’s noninfallible teaching that contraception was morally wrong resulted in a student strike. The priest was reinstated quickly, ending the strike.

In 1986, the Vatican declared Fr. Curran unfit to teach Catholic theology because of his dissent from certain Church teachings and he was eventually removed from his position at Catholic University.

‘Humanae Vitae’ rooted in respect Church has for human dignity

For defenders of “Humanae Vitae,” however, the enduring relevance of the encyclical is a testament to the truth of its message. While it is not infallible teaching, it is still the official doctrine of the Church, requiring assent by all Catholics unless it is modified.

“Perhaps the most surprising thing about the encyclical … is how reports of its imminent death were continually exaggerated,” wrote Helen Alvaré recently for Catholic News Service’s “Faith Alive!” religious education series.

The law professor and pro-life advocate attributes this to the flaws of the birth control revolution and to a deeper appreciation of the “Humanae Vitae” message.

“Over time, as the sexual revolution played out and contraception failed to live up to its billing, fair observers began to note a positive or prophetic thing or two about ‘Humanae Vitae,’ along with its surprisingly accurate read of human nature,” she wrote.

Janet Smith, who holds the Father Michael J. McGivney chair of life ethics at Sacred Heart Major Seminary in Detroit, told CNS the encyclical’s opening line — stating that “the most serious duty of transmitting human life” stems from the call of marriage — is the basis for Church teaching on the family.

The difficulty facing the Church is that young people generally view sex as a pleasurable experience shared among consenting partners, she said. However, in talks around the country Smith has encountered young people who “see the meaninglessness of casual sex,” creating an opening to explore the message of “Humanae Vitae.”

“It’s a growing movement of young people who are interested in being 100 percent Catholic,” she said.

Alvaré echoes this assessment: “‘Humanae Vitae’ took sex seriously, far more seriously than the contemporary world, for all of its talk about sex,” she wrote.

In April, Philadelphia Archbishop Charles J. Chaput told a Catholic University of America symposium commemorating the encyclical’s anniversary that it is time for the Church’s teaching on marriage, abortion, human sexuality and artificial contraception to be embraced as God’s will for the faithful.

He explained that the teaching is rooted in the same respect for human dignity that guides its work for social justice and care for poor people.

“‘Humanae Vitae’ revealed deep wounds in the Church about our understanding of the human person, the nature of sexuality and marriage as God created it. We still seek the cure for those wounds. But thanks to the witness of St. John Paul II, Pope Benedict, Pope Francis and many other faithful shepherds, the Church has continued to preach the truth of Jesus Christ about who we are and what God desires for us,” the archbishop said.

“People willing to open their eyes and their hearts to the truth will see the hope that Catholic teaching represents and the power that comes when that truth makes us free,” he added.

The challenge facing the Church is that the encyclical itself is rarely addressed by priests and as a result is little known, especially among young adults.

While NFP classes are required as a part of marriage preparation in only a dozen dioceses, including the Diocese of Phoenix, it is taught just about everywhere.

Dominic Lombardi, executive director of the Secretariat of Laity, Marriage, Family Life and Youth at the U.S. Conference of Catholic Bishops, knows it’s difficult to share a message that few have heard, especially one that diverges from the values of mainstream culture.

That makes the encyclical an important document for the life of the Church even if it gets scant attention from the pulpit, he said.

Marriage preparation programs offer a good place to “sow a seed” with young engaged couples, he said, adding that married couples living the teaching can be the inspiration for others.

“Then the Church should accompany couples and this witness for married life. You could say these couples who have lived out the freedom of ‘Humanae Vitae,’ they really are missionary couples,” Lombardi said.

“Then the Church should accompany couples and this witness for married life. You could say these couples who have lived out the freedom of ‘Humanae Vitae,’ they really are missionary couples,” Lombardi said.

Fr. Tadeusz Pacholczyk, director of education at the National Catholic Bioethics Center, said that parish-based programs to share Church teaching on marriage and artificial contraception will have the longest-standing impact. He urged priests to begin to address the teaching more often.

“I understand the challenge some priests feel in terms of speaking about this publicly,” Fr. Pacholczyk told CNS. “But I will often encourage priests to at least mention the teaching. There’s certainly places where it certainly should be part of the discussion as part of marriage programs.”

The anniversary of “Humanae Vitae” coincides with the upcoming canonization of Paul VI in a ceremony to be celebrated by Pope Francis Oct. 14, during the Synod of Bishops on youth.