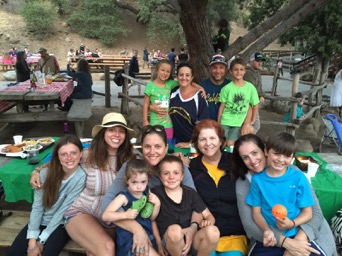 Some grandparent updates have passed through my inbox recently. Each story points to the enormous value grandparents often have in passing on the faith, be it by gentle example or something more direct.

It started with the passing of John Borst II’s grandfather. John, now a young adult, read a well-composed reflection on his life with him. The words were taken verbatim from a letter he wrote — and later read — to his grandfather at his bedside in Edward McDonnell (Ted)’s his final days. John spent essentially every Sunday with his grandpa, who was active in the Men’s Club at Our Lady of Perpetual Help in Scottsdale.

“One minute I’m climbing out of my crib, peeking around the corner watching you sit in your chair reading the paper; while the next minute we’re flying to Loras College together, stealing shower caps and exploring your old stomping grounds.

John knew his grandpa’s earthly journey was nearly complete, but because his grandpa put all six of his own children through local Catholic schools and modeled the faith at home, John is also a practicing Catholic. He wrote quite confidently that despite their adventures the last two decades, “there are still more left ahead… As I prepare to continue my journey into adulthood, you are preparing to go on a much greater and exciting journey.”

The 20-year-old OLPH and Brophy graduate promised his grandpa that “the best is yet to come. You’ll be bathed in the light of the Holy Spirit, and dressed in the finest clothes,” John wrote. He also spoke of feasting and rejoicing.

Other words sympathized with his grandfather’s earthly pain. In McDonnell’s final days on earth, his grandson had the heart to tell him that his life lessons will guide him into the distant future. “And when that final Sunday comes, and it’s time for me to leave this world, and follow you into the next, you’ll be there to take me home,” John wrote.

This week, a reader tipped me off to her own book, one whose title is very appropriate for this weekend, “My Children’s Children.” The second Sunday of September — this year falling on the 11th — marks Grandparents Day.

Janet LaPlante, who does a lot of work with Phoenix’s Radio Family Rosary, summed up the book in the subtitle: “How we grow in our spirituality through our life experiences and relationships.” The book tells stories of her life, which by extension includes her family and friends.

Each one of them, whether they lived through hardship and sorrow, or joy and peace, always found the outcome to be a growth in their spirituality, LaPlante said.

Sections of the book talk about grandchildren. LaPlante is a grandmother of six. All live in California which has her visiting there for fun and to help out their parents. LaPlante found herself leaning even more so on her faith with grandchild #1. Doctors discovered a serious heart problem with the baby and suggested an abortion.

That boy is now 11 and active, articulate and a great bunkmate, LaPlante said.

“We thank God for our day and ask Mary to watch over Mommy and Daddy,” she said. “One night, I was still crawling in, when he said ‘Let’s do that God thing, Nonnie.’ I also mentioned praying during a tight football game he was watching and down on his knees he went.”

Not all of her adult children are practicing Catholics, but LaPlante sees her faith shining through to them. Church discussions are peaceful and the grandchildren are receiving the sacraments.

Shirley Smalley is entering her second year of working with children — her grandnephew included — at Annunciation Catholic School in Cave Creek. She intended to start as a helper for the new Young Vincentian group, but when that teacher resigned to tend to an illness, Smalley stepped in.

“Over the years, I had worked with young people who on a regular basis volunteered with adult conferences, but I had little experience with an actual youth conference,” the former youth minister said. “The ACS Vibrant Vinnies really live up to their name. This year we have almost 30 members who range in age from fifth to eighth grade.”

There are one to two service projects each month and home visits during the summer with an inner city conference.

“Each month, I stand in awe of their commitment to helping others, their increasing awareness of the social issues that lead to poverty, their understanding of the Society its history and its mission, and their determination to use their youth as a unique springboard to service,” Smalley said.

The conference motto is “You are never too young to make a difference.”

That showed especially during a Game Night at Ozanam Manor. More adults than usual participated. By the end of the evening, 22 youth and residents were gathered around one table playing “Apples to Apples” and no one wanted the game to end.

“The residents were comfortable and relaxed around the kids. No one was afraid of not measuring up. In the faces of these young Vincentians, the residents remembered their own children, grandchildren, nieces, and nephews and the room was filled with joy and laughter,” Smalley said.