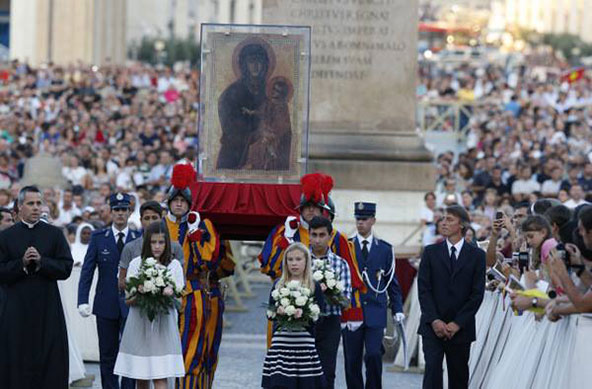 VATICAN CITY (CNS) — For the thousands of people who turned out for a solemn vigil in St. Peter’s Square, the power of prayer and hopes for peace are still mightier than the world’s weapons and wars.

“Instead of using hatred, we are using prayer because it’s the only thing that can bring calm and peace to everything,” Michele Di Stadio, 20, told Catholic News Service.

Di Stadio came with 30 other young people from the Neocatechumenal Way in Rome, he said, “to pray so that a war that would only cause a world catastrophe wouldn’t happen.”

While the journey to St. Peter’s Square wasn’t anything unusual for Di Stadio and his friends, it was a once-in-a-lifetime opportunity for Julie Abdelky, her husband and her brother Walif, who flew in from Damascus, Syria, specifically to take part in Pope Francis’ call for peace in Syria and the whole world.

The pope called people to come to St. Peter’s so they could “raise their voices so the world can hear,” she said.

“Jesus can hear us better from here, too,” added her husband, Tarek Harmouch.

Holding a Syrian flag, Julie also pulled out a small sign she had printed from a computer: “Don’t turn off the light that led St. Paul to Christ; Stand by Syria.”

People need to remember “Syria has been the land of Christ. St. Paul opened his eyes in Damascus and he started spreading his message from Damascus,” she said.

The Sept. 7 evening vigil that drew tens of thousands of people to Rome and inspired similar events of prayer and reflection by countless other people of different faiths worldwide “must have an impact,” said Julie, who is a Christian.

“We believe that people are not like politics; people believe in God, they care about peace,” she said. And prayer is a powerful force, she added, “It’s the only candle you cannot turn off.”

A gathering called by the pope is also more potent than a locally-organized demonstration in a city center, said Joseph Day, a student from Rehoboth, Mass., studying in Rome.

The pope is “the leader of more than 1 billion Catholics who live in all nations, including those wanting to go to war. They will have an effect on people in those countries and I hope and think they will have an effect on politicians, too,” said Day, who was sporting a grey T-shirt emblazoned with “Pope Benedict XVI” on the back — a souvenir from the retired pope’s 2008 visit to the United States.

“Prayer is very powerful, it can do all things,” he said. If God is there when just two or three people gather together in his name, then having thousands in Rome and thousands more worldwide gathering in his name “will make a very effective prayer,” he said.

However, Christian Roehl, a tourist from Munich, Germany, said he thought the event would have no impact on world leaders.

“(U.S.Obama will do what he wants to do. I don’t know why he got the Nobel Peace Prize and I am very angry and sad at the United States for wanting to have a war,” he said.

Unlike his name, Roehl laughed, he is not a Christian and he thought praying for peace wouldn’t do much.

“If the pope can call (Obama) by telephone and tell him ‘No war’ then that might be a more powerful influence than this. This is just a love parade,” he said.

Roehl’s companion, Anke Meierhenrich, shook her head in disagreement and interrupted saying that a gathering for peace was “very good.”

“It will have lots of publicity, everyone will watch it on television. It will raise awareness about the conflict, which is a good thing to do,” she said.

Margaret Maars from Wagga Wagga, Australia, said a person has to believe in prayer for it to be effective.

“Sometimes I can feel a bit cynical with all the sadness in the world, but I still hold onto my faith very firmly,” she said.