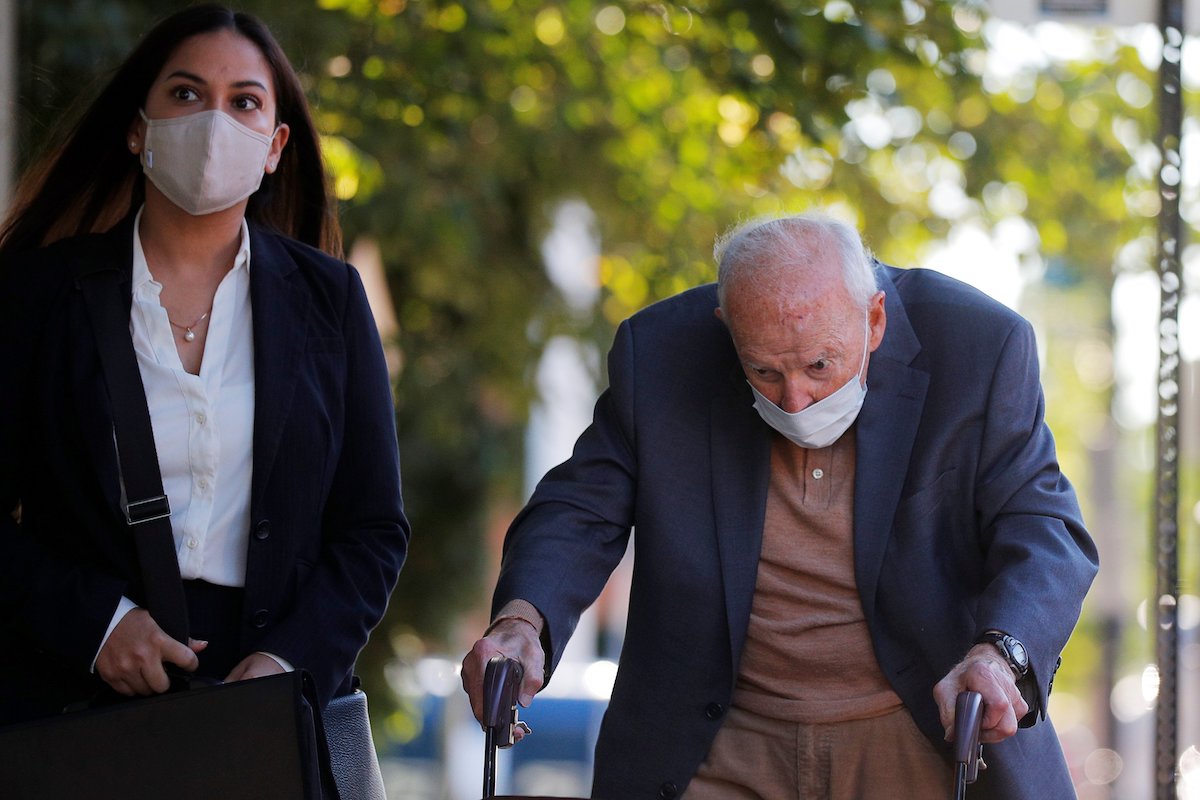 WASHINGTON (CNS) — Former Cardinal Theodore E. McCarrick pleaded not guilty Sept. 3 in a Massachusetts court, where he is facing three counts of sexually assaulting a teenager in the 1970s.

Local news reporters posted video on Twitter of the 91-year-old McCarrick, wearing a face mask and slowly heading toward Dedham District Court with the aid of a walker as protesters shouted, “Go to hell, McCarrick,” and “How many lives, how many children?”

He was not taken under custody but was ordered to post $5,000 bail and have no contact with the alleged victim or children. The former high-ranking, globe-trotting church official also was ordered not to leave the country and surrendered his passport.

His next court appearance is Oct. 28.

The day before the arraignment, a former employee and a former priest of the Archdiocese of Newark filed lawsuits alleging unpermitted sexual contact by McCarrick for incidents in 1991.

The Massachusetts case is the first time, however, that McCarrick has faced criminal charges for assault of a minor, which is alleged to first have taken place at a wedding reception in 1974 and continued over the years in different states. Massachusetts allows for a pause of the statute of limitations in criminal cases “when (the) defendant is not usually and publicly resident,” says the website Findlaw.com

“This is to prevent criminals from avoiding the consequences of their crimes by simply running, hiding and waiting out the authorities,” it explains. Because McCarrick, who didn’t live in Massachusetts, left the state, it put in place the “pause” needed for authorities to file charges against him for incidents that allegedly took place almost 50 years ago.

The state prosecutor, addressing the judge hearing the case, said McCarrick had immersed himself into the fabric of the victim’s family, using his status as a priest to access and prey on the boy.

“He specifically used the act of confession to get the victim away from his parents and from his siblings and then would sexually assault the victim during that time frame,” the prosecutor said.

In a statement on the day of the arraignment, the Archdiocese of Boston praised the legal action.

“Today’s legal proceeding is an important step in revealing the truth in a just and consequential manner,” it said, noting that McCarrick’s canonical conviction resulted in his dismissal from the priesthood.”

“Today he stands before the people of the Commonwealth through the judicial system to answer the serious charges against him,” the statement said. “We are grateful that the survivor in the Massachusetts case and all survivors, who have the courage to come forward, bring to light the crimes alleged.”

The statement also said that archdiocesan leaders were praying for “all impacted by this case and for all survivors of clergy sexual abuse that they are able to experience healing and know of God’s endless love for them today and always.”

Others have publicly accused McCarrick of abusing them as children, too, but charges weren’t pursued in many cases as the statute of limitations in those localities had run out. However, many of them said they or their families and sometimes priests, over the years, reported the suspected abuse to high-ranking church officials who did nothing.

In 2018, however, the Archdiocese of New York found an allegation that McCarrick had abused a 16-year-old altar server in New York in 1971 “credible and substantiated” and turned the case over to the Vatican.

McCarrick was dismissed by the Vatican from the clerical state in 2019 following an investigation of accusations that he had abused multiple children early on in his career of more than 60 years as a cleric, and that he also had abused seminarians as a bishop in New Jersey.

In November 2020, the Vatican issued a report attempting to understand, why, if church officials knew of the abundant allegations against him, they allowed the abuse to continue, and why the church elevated him to a cardinal.

The report showed that McCarrick had a deep friendship with St. John Paul II, who, as pope, heard about the sex abuse accusations against the cleric when he considered naming him archbishop of Washington in 2000 but believed him when he denied wrongdoings. He made him a cardinal a few months later in 2001.

“This is a landmark moment in the fight against clergy abuse and we hope that this news will inspire vigilance among parishioners and change among church leaders,” said the Survivors Network of those Abused by Priests, known as SNAP, in a Sept. 2 press release.

Protesters held signs outside the Massachusetts court saying, “Plead guilty McCarrick,” and “Ordained and Betrayed by ‘Uncle Ted,'” using a moniker the former cardinal gave himself among some families when he referred to some of the boys who later accused him of abuse as his “nephews.”

“The case against McCarrick represents a large step forward in the efforts to hold church officials accountable for abuse and cover-up,” said SNAP in its press release.

“We hope that this trial will encourage still-silent victims, witnesses, and whistleblowers to come forward. Without such voices, this case never would have gotten to this point.

“We also hope that other survivors who are still experiencing feelings of shame and self-doubt will find the strength to make a report to local law enforcement, trusted therapists, close friends and family, or groups like ours. Finally, we hope that these charges will (carry) forward and that the wheels of justice can continue moving.”

McCarrick has in the past denied allegations against him. In a 2019 interview with Slate magazine, he said: “I do not believe that I did the things that they accused me of,” speaking of those who have come forward.