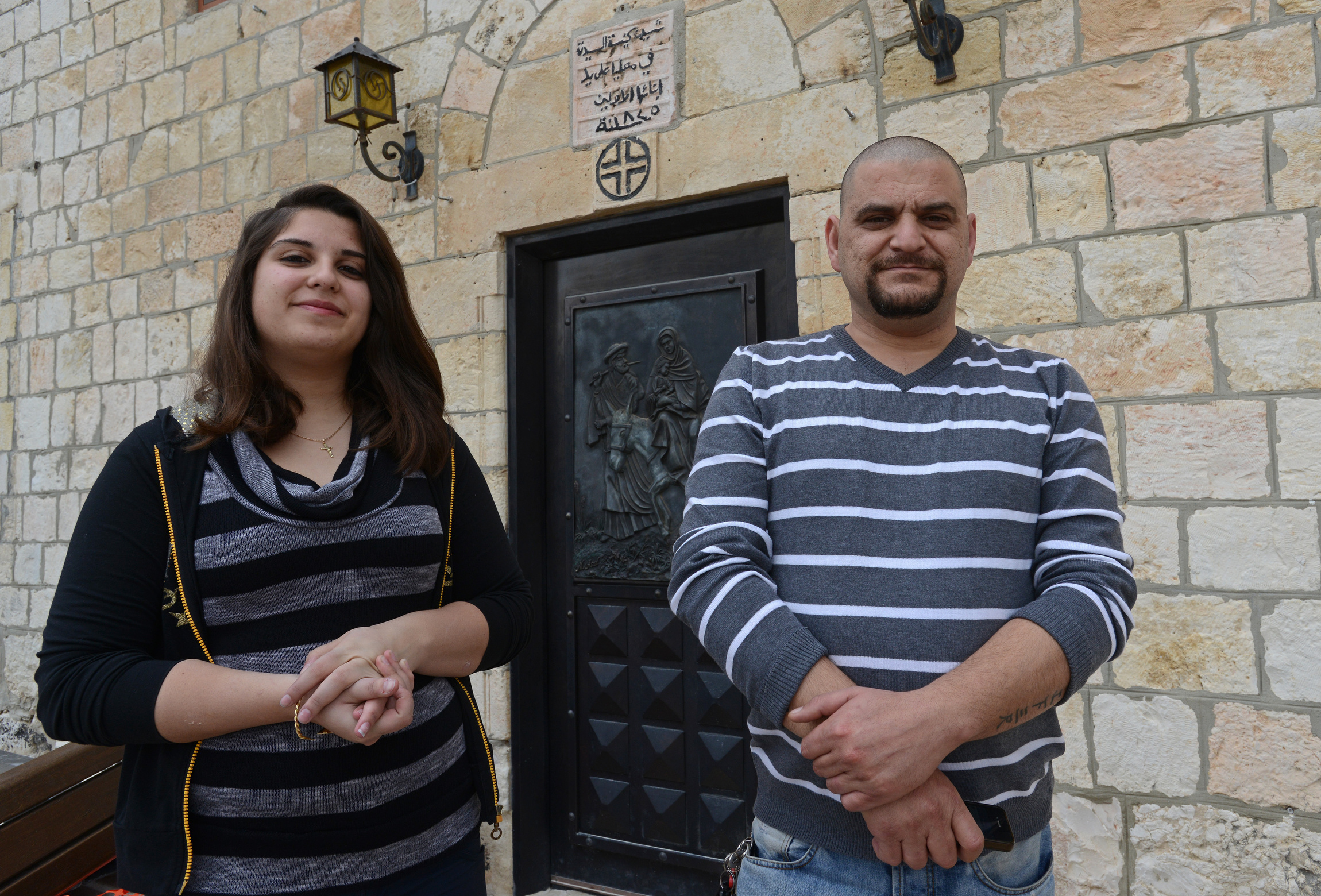 NAZARETH ILLIT, Israel (CNS) — At the end of a recent unofficial pre-induction briefing for about 30 young men preparing to join the Israeli army, the participants stood and, led by Greek Orthodox Father Gabriel Nadaf, recited the Our Father in Arabic with hands outstretched. They finished by making the sign of the cross.

“You are not going to shoot,” said Father Nadaf, the spiritual leader of the year-and-a-half-old Israeli Christian Recruitment Forum, whose 18-year-old son, Jubran, was among the new recruits. Father Nadaf reminded them of the fate of Syrian Christians, some of whom have been kidnapped and killed.

“You are going to protect. You do not go to attack but to defend. The Messiah said not to kill, he did not say don’t defend. We have to defend our Holy Land,” the priest said.

The young men represent an increasing number of young Israeli Christians who are deciding to voluntarily join the Israeli military, explained Capt. Shadi Haloul, 38, the forum’s spokesman, a Maronite Catholic and reservist in the Israeli Defense Forces.

Forum officials said about 84 Christians joined the army in the last half of 2013, the same number that joined in the prior 18 months. Although they are a small part of the 120,000 Christians who live in northern Israel, IDF officials called the forum’s impact “astounding.”

While Jewish men and women and Druze men from the age of 18 are required to serve in the military, Christians and Muslims have been exempt. Historically, Christian Arabs have viewed themselves as part of the Palestinian people and considered service in the army as unthinkable, although individual Christians have volunteered to serve on their own.

The forum was established to help Christians better integrate into Israeli society and to seek equal treatment and opportunities in a country where army service is key to accessing certain jobs and promotions, better mortgage terms and educational opportunities.

But also, as neighboring Arab countries remain in a quagmire of war and violence, some Israeli Christians say they want to help defend the only country in the region where they believe Christians have equal protection and freedom despite the occasional inequality.

“If we look around at the surrounding countries we see what is happening to Christians,” Haloul said. “As a democracy (in Israel) you are welcome to walk around the streets … and we have to defend this country. We have no other country.”

Haloul said that, with the forum’s help, an office has been established to facilitate Christian recruitment. He wants his recruits to stand out, be sent to the top units and attend officer-training courses. He wants them to excel and take advantage of all that the army can offer.

Many outside groups are eager to see Christians fail, he said, so he wants the young people to be as prepared and motivated as possible for their army service.

“Before we went in as individuals, and we did not gain anything. Today we are going in as a group and we have to take advantage of all the opportunities,” Haloul told the recruits in Hebrew. He reminded the men that they not only will be judged as individuals when they enter the army, but also will be representing the whole Christian community.

Forum officials also hope that Father Nadaf will receive official army clergy status so he will be able to visit Christian soldiers during their service.

Father Nadaf acknowledged that his position is not popular within his church, although he has not been told to stop his forum activities. He also said retired Latin Patriarch Michel Sabbah has come out against the forum’s work.

“I support the Christian integration into Israeli society, and the key to that integration is in the army,” Father Nadaf told Catholic News Service after the briefing. “We have to protect the country we live in. With rights also come responsibilities. Christians serve in the army of other countries. Why should it be different in Israel? Jews are not our enemy. Christianity comes from Judaism.”

Faras Mattar, 19, of Cana, who was accompanied to the briefing by his 60-year-old father William, an Israeli army veteran, said Father Nadaf’s spiritual leadership will help him remain connected to his faith during his service.

“Israel provides security and defends all its citizens, and I want to do my part,” he said. “I don’t care what other people say. The truth is I am doing this to defend my family.”

Forum members, including the priest, said they have been threatened, and Father Nadaf’s son was attacked in Nazareth.

“Some people may say we are traitors,” said the younger Nadaf, who after his compulsory service wants to make a career in the army. “But I tell them to go live in Gaza if they are against Israel. We live here. This is my country and I have to give back.”

Arab members of the Israeli Knesset are among opponents of the forum’s work, including its support for the recently passed legislation creating a specific Christian seat on the equal employment opportunities advisory committee that addresses job discrimination. They accused Israel and the forum of ignoring discrimination concerns and trying to divide Israel’s Arab population.

However, as issues of identity and integration become prominent, a minority within Israel’s Christian community is beginning to identify more with their Christian faith rather than with the Arabic language they speak. They say Christians were in the Holy Land before the seventh-century Arab Muslim conquest.

“People say we are Arab but we believe we are Arabic speaking Christians,” said Samer Jozel, 39, of the Melkite Catholic village of Mi’ilyah in Galilee, who served in the army. “We see what is happening to Christians in Arab countries.”

“This is the right thing to do,” said Jozel’s 17-year-old daughter, Jennifer, who in September will join the air force and be assigned to the Iron Dome missile-defense system. “It is important to defend my country. When the missiles fall they don’t distinguish between who is Jewish and who is not.”