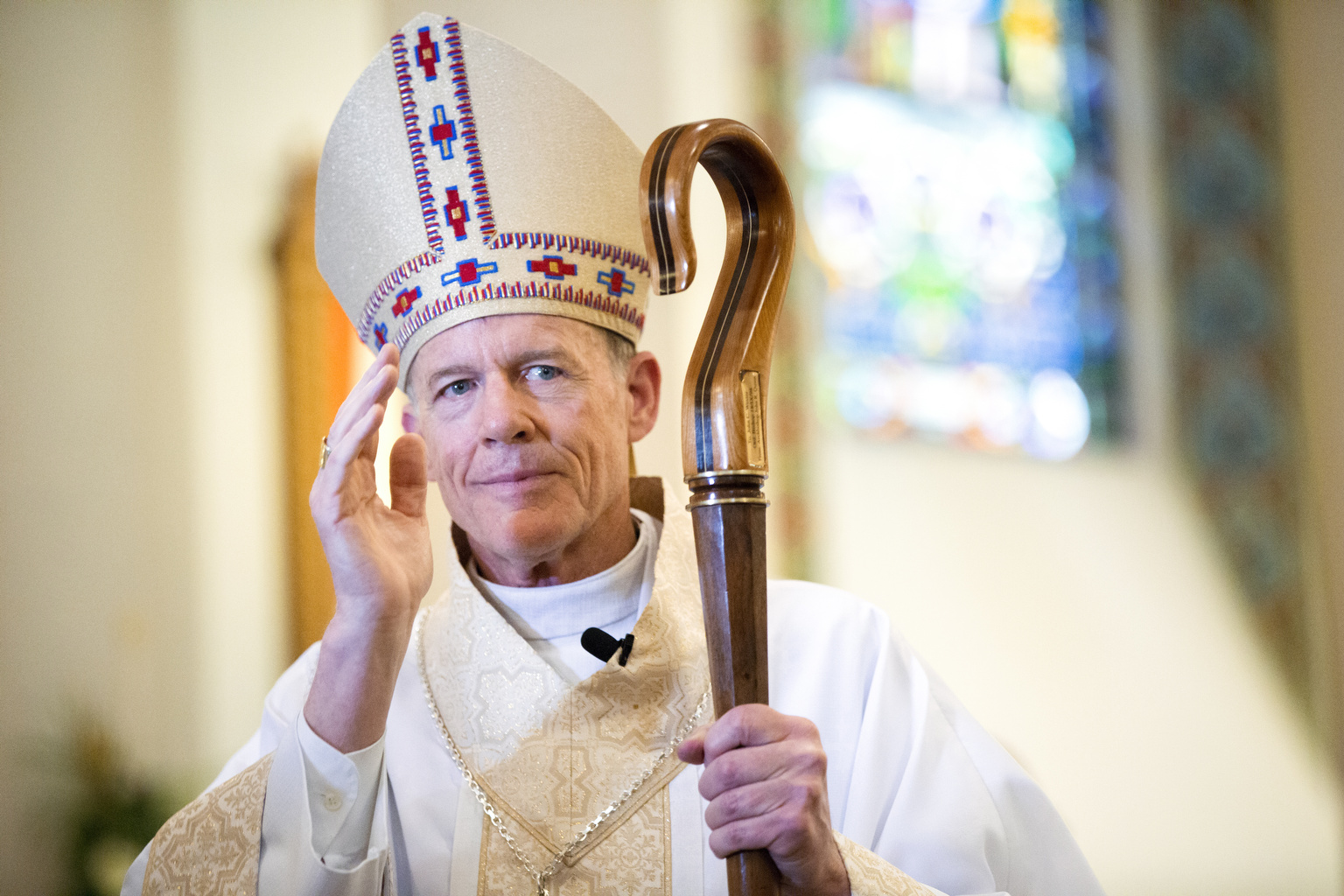 SANTA FE, N.M. (CNS) — In his homily for his installation Mass June 4 as the new archbishop of Santa Fe, Archbishop John C. Wester recalled that Christ is represented symbolically as both the Good Shepherd and the Lamb of God.

“You and I are called to resign to ourselves in front of Our Lord Jesus as he did when he became one in us,” the archbishop said in Spanish. “As his disciples, the Lord calls us to give one and another so we can be the body of Christ, the Church.”

Switching to English, the archbishop developed these themes more deeply.

“The image of the lamb in our churches points to the Good Shepherd in today’s Gospel, who cares for the sheep so much that he laid down his life for them, becoming the lamb of sacrifice,” he said. “It is precisely as the Lamb of sacrifice that Jesus fulfills his role of shepherd, leading us through the cross to the Father, at whose right hand he sits.”

Saying he was grateful to God for calling him to New Mexico, he added, “I am eager to listen to you and to learn from you how God has been working in your midst, calling you to new and ever-deepening life.”

Archbishop Wester, 64, had headed the Salt Lake City Diocese, which encompasses the entire state of Utah, since 2007. On April 28, Pope Francis named him to succeed Archbishop Michael J. Sheehan. His installation Mass was celebrated at the Cathedral Basilica of St. Francis of Assisi in Santa Fe.

In his role as archbishop, Archbishop Wester also serves as the metropolitan for the Ecclesiastical Province of Santa Fe, which encompasses all of the dioceses in New Mexico and Arizona, including the Diocese of Phoenix.

“Taking my cue from Pope Francis,” he said in his homily, “I realize there will be times when I lead from the front of the flock, or from behind, but always my place is squarely in your midst, giving thanks for your willingness to receive me, and assuring you of my desire to serve you to the best of my ability.

Although he will miss the church in Utah, he said, “it is their love and their support that now will enable me to open myself to you, my brothers and sisters of this pilgrim Church in the Southwest for years to come.”

He mentioned that his father and friends, such as Sulpician Father Gene Konkel “and so many other family and friends in the Communion of Saints, are praying for me at this very moment. My Swedish father probably is tapping Father Gene on the shoulder and saying, ‘How did that square-head ever make it to Santa Fe.’ But I’m sure he’s also saying, ‘That’s my boy.’”

Another theme of Archbishop Wester’s homily was that Catholics are called “to serve the presence of God in the public square and to lead others to the good news that has found us and has taken hold of us. We who recognize the voice of the Good Shepherd are called to bring hope to the whole world, inviting others into the fold through our evangelization, our living of the Gospel,” he said.

By pointing out God, who is in everything, to others, especially those who are suffering, he said, “we bring them evangelical hope; that is, we remind them that they are not alone — Christ is there with them, and in the midst of it all, and he will never, ever abandon them.”

“That stranger is not always someone from another country. It can also be someone in our own family, our own parish, our own neighborhood.”

He added that many people “in our midst” suffer from drug or alcohol addiction, fear of losing their employment, mental illness, bigotry or loneliness.

The Catholic Church of Santa Fe has many other issues to address, including poverty, ensuring that the sanctity of human life is valued and upheld, and maintaining a safe environment for youth and young adults, he said.

“In all of this, you and I are called not simply to point to the Good Shepherd, but to enlarge the fold, to help others realize that we are one, and we give of ourselves not out of charity, necessarily, but because we are one in Christ, united in love and mercy,” he said.

Referencing Psalm 145, the archbishop said justice and mercy must go together.

“We must always show mercy to everyone, since God loves all his children, especially those who are most vulnerable, whose lives hang in the balance like a smoldering wick or a bruised reed, whether in the womb, living in the streets, or far from home,” he said.

Archbishop Wester told the congregation he cannot be their bishop unless he is one with them.

“And I can’t be one with you unless you embrace me as your bishop. I look forward to the years ahead as we journey with each other in the process of becoming one with Christ and one with each other, giving glory and praise to God as we are called to the Supper of the Lamb.”

Ending his homily in Spanish, he said: “Please pray for me so I can keep following Christ, our good shepherd, giving myself completely to this faithful church of Santa Fe as your new pastor, so that in the upcoming years our loving God blesses and guides our steps as witnesses of the Lamb of God present in our midst in all the Southwest.”

— Marie Mischel, editor of the Intermountain Catholic, newspaper of the Diocese of Salt Lake City.