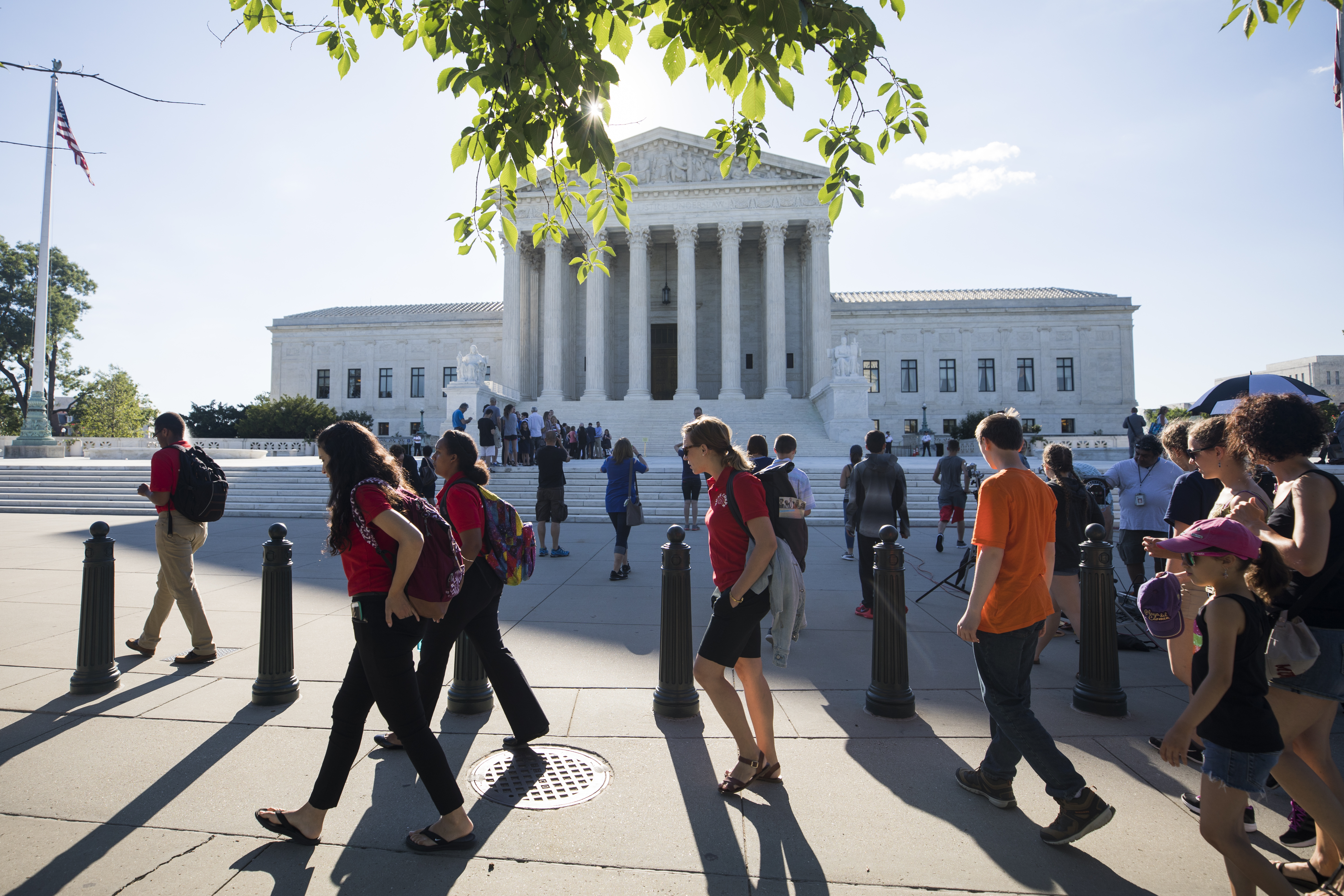 WASHINGTON (CNS) — In a 7-2 decision, the Supreme Court June 26 said a Lutheran preschool should not be excluded from a state grant program to refurbish its playground surface just because it is a religious entity.

“The exclusion of Trinity Lutheran from a public benefit for which it is otherwise qualified, solely because it is a church, is odious to our Constitution all the same, and cannot stand,” wrote Chief Justice John Roberts in the court’s opinion.

The court’s decision reverses a ruling by the 8th U.S. Circuit Court of Appeals that had sided with the state’s 2015 decision to exclude the school from obtaining grant funds.

Roberts said the appeals court decision made it clear that the Trinity Lutheran preschool was “put to the choice between being a church and receiving a government benefit,” and the answer they were given was: “No churches need apply.”

At issue in Trinity Lutheran Church v. Comer was the school’s denial of grant reimbursement to nonprofit groups for the cost of purchasing and installing playground surfaces using recycled tires through a state program.

Missouri’s Department of Natural Resources, which administers the playground resurfacing program, ranked Trinity Lutheran’s grant application fifth out of the 44 it received. The department, which funds 14 grants, said it denied the school’s application because the state constitution prohibits state funds from going “directly or indirectly, in aid of any church, sect or denomination of religion.”

For Trinity Lutheran, the bigger issue was the school’s constitutional right to the free exercise of religion, which was a key point in oral arguments presented to the court in April.

The court’s opinion noted that the school was not claiming “any entitlement to a subsidy” but was asserting its “right to participate in a government benefit program without having to disavow its religious character.”

It also said the case indicated discrimination against religious exercise not just in “the denial of a grant, but rather the refusal to allow the church — solely because it is a church — to compete with secular organizations for a grant.”

The court stressed that this case was unlike Locke v. Davey, a 2004 court ruling which said federally funded scholarships were not required to go to college students who were receiving divinity degrees. In the preschool case, the playground grant was not related to religion.

Roberts, writing the court’s 19-page opinion, said the student in question in the Davey case was not denied a scholarship because of who he was but “because of what he proposed to do — using taxpayer funds in a clergy training program.” In the playground resurfacing case, Roberts wrote: “There is no question that Trinity Lutheran was denied a grant simply because of what it is — a church.”

Roberts’ opinion states from the outset that he did not concur with footnote No. 3. Justices Clarence Thomas and Neil Gorsuch made similar distinctions. Justices Samuel Alito, Stephen Breyer, Elena Kagan and Anthony Kennedy concurred in full with the opinion. Justice Sonia Sotomayor issued a 27-page dissenting opinion joined by Justice Ruth Bader Ginsburg.

The footnote in question says: “This case involves express discrimination based on religious identity with respect to playground resurfacing. We do not address religious uses of funding or other forms of discrimination,” which may limit the scope of the ruling.

Sotomayor said the court described the Lutheran school decision as “a simple case about recycling tires to resurface a playground,” but she warned that the “stakes are higher.”

She said the court’s ruling “profoundly changes” the relationship between church and state “by holding, for the first time, that the Constitution requires the government to provide public funds directly to a church.”

“Today’s decision is a landmark victory for religious freedom,” said Archbishop William E. Lori of Baltimore, chairman of the U.S. bishops’ Committee for Religious Liberty. “The Supreme Court rightly recognized that people of faith should not be discriminated against when it comes to government programs that should be made available to all.”

He also said the high court’s ruling “marks a step in the right direction toward limiting the effects of the pernicious Blaine amendments that are in place in many states around the country.”

The amendments to state constitutions, dating back to the 19th century for the most part, “stem from a time of intense anti-Catholic bigotry in many parts of the country,” he said in a statement. These “harmful provisions,” he added, have “restricted the freedom of faith-based organizations and people of faith to serve their communities.”

Becket filed a filed a friend-of-the-court brief on the school’s behalf as did the U.S. Conference of Catholic Bishops, the Missouri Catholic Conference, the National Catholic Educational Association, the Church of Jesus Christ of Latter-day Saints, the General Synod of the Reformed Church in America and the Salvation Army.

“This decision is significant because seven of the justices agreed that churches can’t be treated as second-class citizens when it comes to widely available public safety benefits,” said Smith.

“The Missouri Constitution’s Blaine amendment should act as a shield against the establishment of an official state religion,” said Mike Hoey, executive director of the Missouri Catholic Conference, in a statement applauding the U.S. Supreme Court’s decision.

The amendment “should not act as a bar to a religious organization receiving a nonsectarian grant, like the [one] offered through the scrap tire program, that do nothing to establish a religion,” he said.

“This is an extremely important case just because of the way that the law has been going under the Free Exercise Clause and sometimes being subsumed by the Establishment Clause. … They’re certainly both there, but they’re both there to protect religious freedom and not discriminate against religious freedom or discriminate against the people of faith or religious organizations,” said David Cortman, vice president of U.S. litigation at Alliance for Defending Freedom, in a news conference.

The Alliance for Defending Freedom is an advocacy group dedicated to fighting and winning cases for religious liberty, among many things. The organization argued on behalf of Trinity Lutheran in court.

“We didn’t ask for special treatment, we asked for equal treatment for people of faith,” said Michael Farris, who is the alliance’s president, CEO and general counsel, in a statement. “And the court agreed that the government cannot discriminate against people of faith by treating them unequally.”