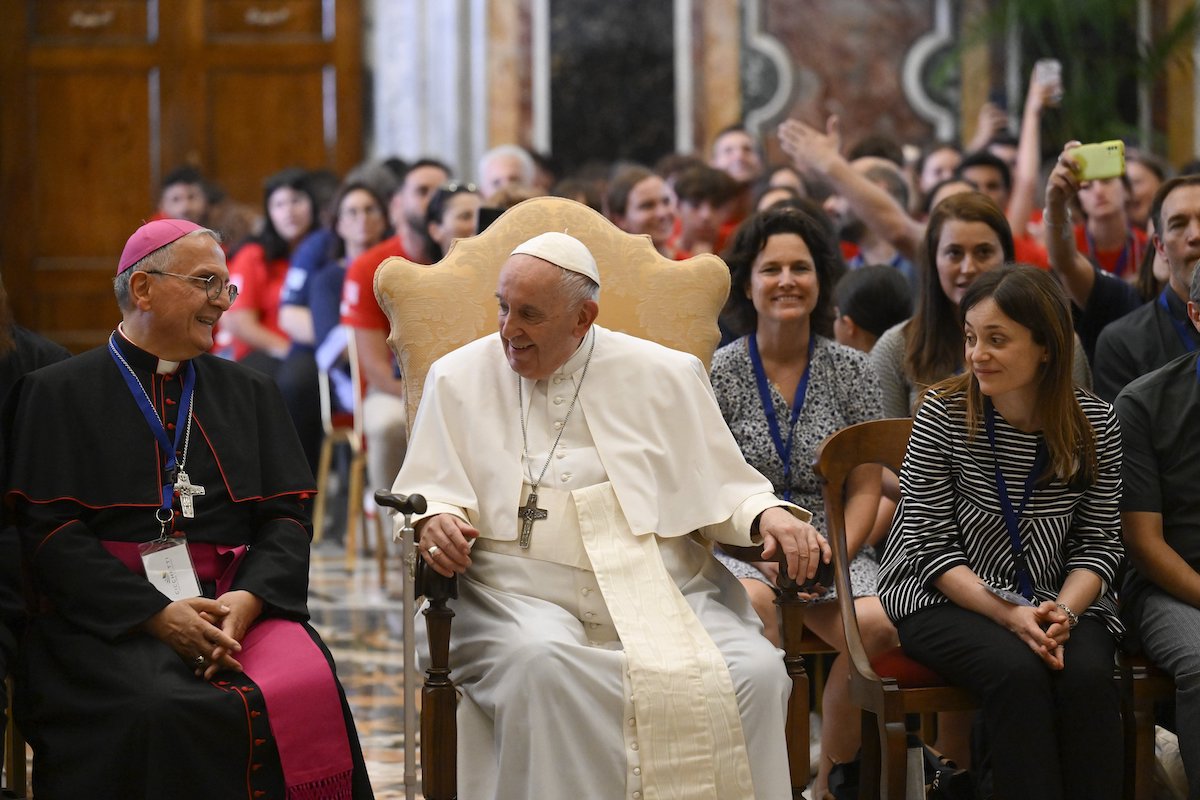 VATICAN CITY (CNS) — When united with Christ, young men and women can live a meaningful life devoid of the egotistical and narcissistic nature of today’s culture, Pope Francis said.

“In union with Jesus, each of you becomes a seed destined to blossom, to grow and bear fruit. But we need to follow him,” the pope told a group of young men and women participating in a summer camp program sponsored by Alpha International.

“That means saying no to selfishness, to self-centeredness, to wanting to appear other than what we are. No! It means being ourselves, neither puffed up nor downcast, but seeing ourselves for who we are. That is true humility,” he said Aug. 5.

The pope met with the young people from Italy and all over Europe who were attending a weeklong summer camp sponsored by Alpha International, a Christian organization that gives people the “opportunity to explore faith, ask questions and share their point of view,” the organization’s website stated.

In his address, the pope said that although young people today “have grown up with instant information,” deep within their hearts they are searching for meaning in their lives and “thirst for something greater, for the infinite.”

Recalling his July 24-29 visit to Canada, the pope said the Indigenous peoples of the country “are guardians of ancestral values and traditions, yet they live in a country that is very modern and very secularized.”

The summer camp attendees, the pope added, reminded him of the young Indigenous men and women who “are very different from yourselves, yet also very similar.”

They are “just like you in the sense of being human, of sharing in the things that make us human, such as our relationship with God, with others, with creation and with ourselves, in freedom, generosity and self-giving,” the pope said.

“We long for fulfilment, fullness of life, joy and meaning. And that fulfilment has a name: Jesus Christ,” he said.

The pope encouraged young people to not escape “the evil that is within us and around us” nor “evade reality” but to bear their individual crosses “with love and with joy.”

Christians, he said, cannot bear their crosses “all by ourselves, either, for that is impossible, but always with Jesus, with him leading and ourselves following.”

Recalling the life of Blessed Carlo Acutis, the 15-year-old Italian teenager who used technology to spread devotion to the Eucharist, Pope Francis said that while the blessed teen’s life was very brief, “it was a full life; it was like a race to heaven” because to him, Jesus was not “an idea or moral precept” but “a person, a friend and a companion along the way.”