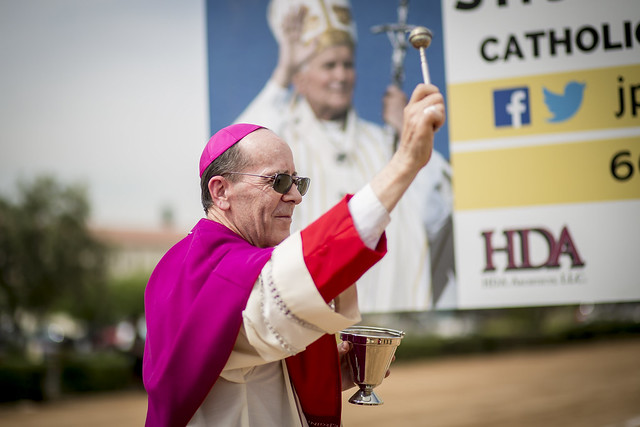 AVONDALE — The idea of a Catholic high school to serve the West Valley finally has tangible signs of reality.

Better yet, its principal plus some 300 prospective students, its superintendents and one of its bishops celebrated as witnesses. So did a supportive community eager to ensure enrollment remains on schedule.

They all gathered at the site of St. John Paul II High School, 13720 W. Thomas Road, as Bishop Thomas J. Olmsted transformed a tiny bit of dirt into holy ground April 5. He blessed the school’s first marquee of sorts too. The colorful sign bears an image of the late pontiff — who left his mark in the Diocese of Phoenix during a 1987 visit — plus vital contact information and social media accounts for the school.

It will be sandwiched between Estrella Mountain Community College and the Southwest Valley YMCA. Agreements are already in place to allow athletes use of both facilities, which includes an Olympic-sized swimming pool.

The new high school will consume 21.6 acres that have long awaited active use. The late Msgr. John McMcahon purchased the land in 1999 while leading diocesan building efforts.

“We are extremely blessed to be here today marking the ceremonial beginning of this wonderful project,” MaryBeth Mueller, superintendent of Catholic schools, told the crowd.

Civil and priestly leaders from as far as Glendale, Peoria and Surprise joined in the celebration. The school’s prospective students, who will likely hail largely from neighboring St. Thomas Aquinas and St. John Vianney essentially three miles to the south, stood on hand as greeters, choir members and readers throughout the brief program.

“This is a great day for the Church in the Southwest,” Bishop Olmsted said.

He recalled St. John Paul II’s World Youth Day initiative and the pope’s conviction that young people need to live their faith now. The bishop thanked the students — all in fourth through seventh grades and poised to be among the school’s first graduating classes — for living their faith and “making a real difference in helping people discover the joy of the Gospel.”

St. John Paul II High School will sit four miles west of Loop 101 and have a pool of potential applicants. Research showed some 70,000 high school students reside in the West Valley area. Enrollment in parish religious education in the western and northwestern parts of the Valley continues to grow. The new high school is projected to welcome freshmen and sophomores first with a phased build out projecting an enrollment cap at 1,000.

Financial numbers weren’t discussed during the site blessing, but funding to open St. John Paul II High School will come from part of a comprehensive five-year capital campaign through the newly established Office of Mission Advancement.

The school’s leadership is in good hands too. Dominican Sister Mary Jordan Hoover currently serves as the founding principal of St. John Paul the Great High School in Virginia. She will become founding principal of St. John Paul II High School in Avondale this summer. Two fellow Dominican Sisters of St. Cecilia will join her in leadership.

Seeing sisters run a school and soaking up their boundless joy for learning and life is part of what excites Gabi Esquivel for the new Catholic high school. The St. John Vianney seventh-grader recalled the days the Salesian sisters staffed her elementary school.

The Dominican Sisters of St. Cecilia, also known as the Nashville Dominicans, currently teach in 34 U.S. schools from preschool through college. The Catholic identity and the pursuit of truth are at the heart of each campus, Sr. Mary Jordan said.

“We believe that Catholic education changes the lives of all who are engaged in it, especially students, teachers and parents. The future St. John Paul II High School will have an impact on the community here in the West Valley,” Sr. Mary Jordan told the crowd.

She quoted from St. John Paul II’s encyclical letter on faith and reason, Fides et Ratio. Sr. Mary Jordan ensured that her future Arizona students will be introduced to the truth and given opportunities to apply reason in order to know the fullness of truth about God and themselves.

Alexa Partida, a seventh-grader at St. Thomas Aquinas, said she was eager to have a Catholic high school nearby. Partida and her St. John Vianney counterpart said they know of students who couldn’t logistically attend a Catholic high school elsewhere — its closest option, Bourgade Catholic High School, is nearly 20 miles away — and settled on other area schools.

“Hopefully people from all around will be able to come to this school,” Partida said, steps away from the future St. John Paul II campus.

When it opens, Notre Dame Preparatory in Scottsdale, which welcomed students in 2002, will finally become a “sophomore” among local Catholic high schools.