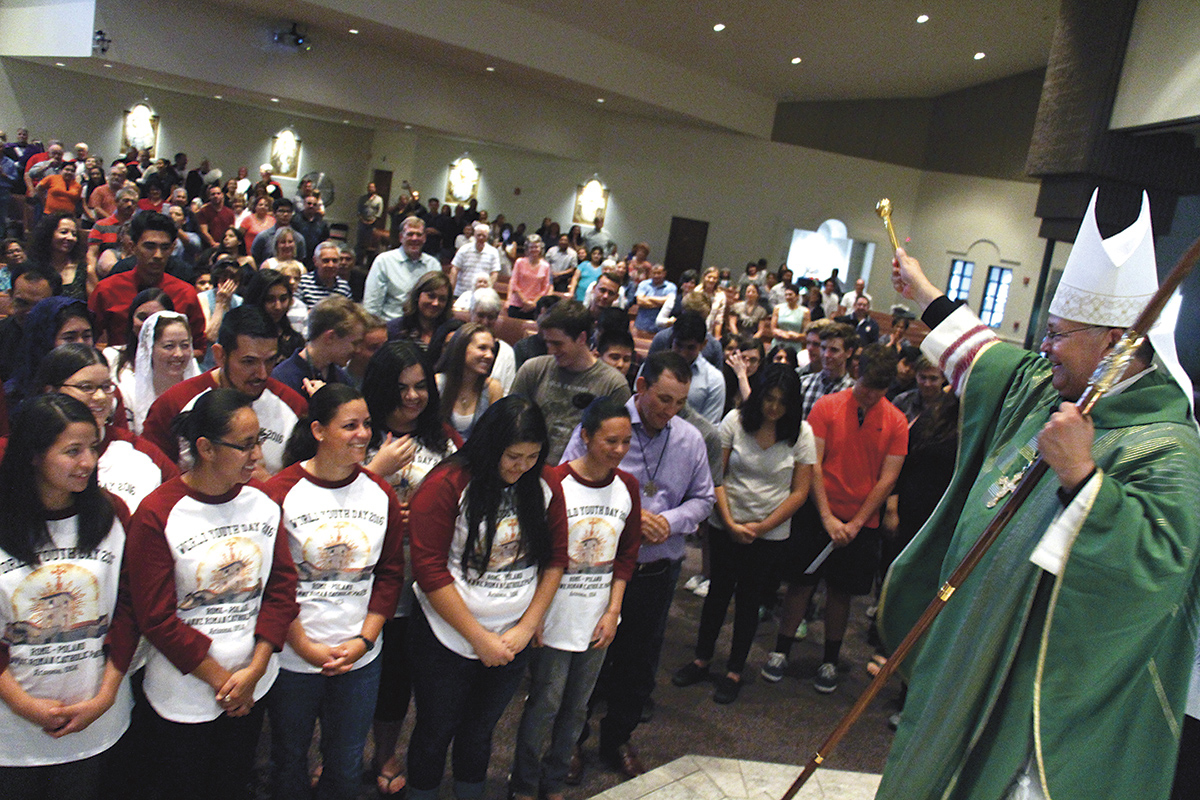 Millions of Catholic youth and young adults are beginning to make their way to the native land of the pope who ignited rapport with young people early in his papacy.

Among them are roughly 10 groups from the Diocese of Phoenix. They represent a solid mix of parish-based, school-based and community-based groups.

Some are headed straight to Poland for this year’s World Youth Day celebration July 26-31 and intend to explore the Church in greater Europe afterward. Others are taking pilgrimages to Auschwitz, Rome, the Holy Land or Assisi first before joining the estimated 3 million pilgrims — including Pope Francis — in Krakow, Poland.

Regardless of their specific itinerary, the pilgrims generally hope to return home with a few things: a more intimate knowledge of the Church, connections with Catholics across the globe and with a firmer or re-energized faith life.

The theme for this year’s World Youth Day, “Blessed are the merciful, for they shall obtain mercy,” is in line with the ongoing Year of Mercy. The Zone of Reconciliation, one of two “special encounter zones” that complement the main events, could see increased traffic.

Poland’s history is a story of resilient Catholic faith

Krakow itself, the host city for World Youth Day, is preparing to triple the number of people in its city. Poland is also observing the 75th anniversary of the martyrdom of St. Maximilian Kolbe and the 1,050th anniversary of Christianity in Poland.

It’s those deep religious roots — the joyful ones and the painful ones — that Fr. Pawel Stawarczyk is eager for World Youth Day pilgrims to experience. The pastor of St. Luke Parish just south of Loop 101 on Seventh Avenue was born and raised in Poland and returns there annually, including this month with fellow pilgrims. Fr. Stawarczyk called Krakow a special city, describing how the churches and monasteries built centuries ago remain open today.

“Krakow is still a living place. Krakow has something that Rome lost,” Fr. Stawarczyk told The Catholic Sun.

He said Krakow has more of the religious spirit in everyday life. Fr. Stawarczyk leaves July 23 with 28 World Youth Day pilgrims who range in age from 11 to 82 — more than half of them are 21 and younger. They represent at least six diocesan parishes plus a 16-year-old now living in Yuma and two Texas pilgrims. Fr. Stawarczyk is among two Polish-speaking pilgrims in the group.

Olivia Jana, a parishioner at St. Patrick in Scottsdale, has a grandfather who was raised pretty close to Krakow. She’s bringing both American and Polish flags, a good spiritual heart and a half page of prayers she solicited from the parish.

Jana also has a devotion to St. John Paul II, making her third World Youth Day pilgrimage extra meaningful. The saint who traversed the streets of Phoenix in 1989, is one of 12 patron saints of this year’s World Youth Day, dubbed #Krakow2016. Pilgrims will have a chance to venerate their relics on display throughout the “City of Saints.” Business cards with details about each saint will help ensure the youth don’t lose contact with the saint after World Youth Day ends.

Many pilgrims, their families and even Catholics without a direct connection to a current pilgrim, already got a solid introduction to the Polish “City of Saints.” St. Andrew the Apostle hosted an evening series throughout May designed to take a closer look at the patron saints of World Youth Day. It drew more than 60 people by the final session.

“People wanted to deepen their understanding of some of the most influential people in the Church’s history, saints like St. Faustina, St. Maximilian Kolbe and St. Pope John Paul II,” said Robert Corwin, director of youth and young adult evangelization at St. Andrew, whose parish hosted a July 12 sendoff Mass for well over 200 pilgrims from throughout the diocese.

Corwin said the period of study was vital for beginning their spiritual formation together. It also set the stage to experience Poland through the eyes of the saints, having context of where the Polish people have been and also where they are being guided by God, he said. World Youth Day draws teenagers, young adults and the “young at heart,” which is part of what drove a grandma to bring her pre-teen and two teenaged grandchildren to Krakow this summer. They’re all parishioners at Our Lady of Joy in Carefree and are traveling with the St. Luke group.

“I want to give my grandchildren a gift,” said Linda Larson, who has already made pilgrimages to the Holy Land and the World Meeting of Families.

For Franciscan Friar Antony Tinker, who was incardinated into the Diocese of Phoenix June 29, World Youth Day will be a chance to promote vocations to the newly established community and grow together as Franciscan Friars of the Holy Spirit. Five of the eight friars, seminarians and a postulant going are rookies when it comes to World Youth Day pilgrimages.

They’re going mainly as pilgrims, but as Fr. Antony put it, “I am a priest and a Franciscan everywhere I go.” They will be available for confessions — just like they are for Mercy Nights in Phoenix — and other priestly ministry.

“I’ve been interceding for the trip asking the Lord to bless me and the community,” Fr. Antony said. “I’ll be bringing a lot of intentions in my heart to the event.”

He also plans to visibly carry an American flag. A friend who did a similar thing at a previous World Youth Day inspired him.

“It breaks the language barrier and it gives people an opportunity to start conversation,” Fr. Antony said.

Fr. Stawarczyk drove home a similar point. Language aside, “Please, chat people up,” he almost begged his pilgrims during a final meeting July 9. “Especially in Poland and Italy, people are very easy to be chatted up.”

While waiting among the crowds, he encouraged pilgrims to ask foreigners how it is in their Church — to burst their American bubble.

Be sure to follow #PhxPilgrims on social media July 26-31