Of the 18 Marian feast days, there’s one that should rest closest to the heart of area Catholics: the feast of Our Lady of Guadalupe.

The feast honors the 16th century appearances of the Blessed Mother to Juan Diego, a poor but faithful Indian who encountered her — and her miraculous roses in winter weather — at Tepeyac hill near Mexico City in 1531. Only eight years later, the Diocese of Phoenix began its “historical prelude” period.

Four centuries after that, Our Lady of Guadalupe ultimately became its patroness and an eternal reminder of two things: Mary transcends cultures and Mary models how to gently, but persistently evangelize those in our midst. Both are key components of the Dec. 8 diocesan Honor Your Mother celebration coming to the streets surrounding the Diocesan Pastoral Center.

“It’s the diocesan celebration for the feast of Our Lady of Guadalupe,” said Ignacio Rodriguez, associate director of Ethnic Ministries.

It’s typically held the Saturday closest to the Dec. 12 feast to allow parish-level celebrations to continue similar and longer-held traditions on the actual feast day. Honor Your Mother began in 2006. It was designed to celebrate Phoenix’s patroness and the unity of the diocese — one that has some 1.1 million Catholics who attend Mass in at least a dozen languages.

This year’s Honor Your Mother comes with a few bonuses. First, since it falls on Dec. 8, the feast of the Immaculate Conception, attending fulfills one’s holy day of obligation requirement. Providentially, Bishop Thomas J. Olmsted consecrated the entire diocese to the Immaculate Heart of Mary last year.

Second, the 2018 Honor Your Mother gathering serves as the official kickoff for a year-long celebration leading up to the official 50th anniversary of the Diocese of Phoenix in 2019. Because of the kickoff, organizers are extending a more intentional invitation to welcome Catholic schools, parish communities and other Catholic groups into the procession lineup.

Finally, alongside the 50th jubilee kickoff is the opening of a local “Year of the Family.” More details on that are forthcoming, but Dr. Maria Chavira, chancellor for the Diocese of Phoenix, said one word she often uses to describe the diocesan family is “faithful.” 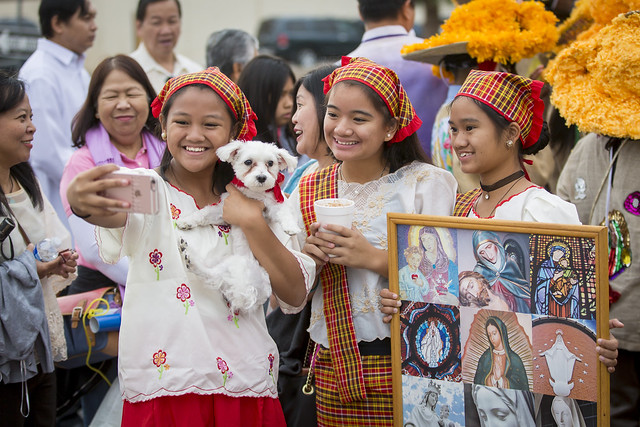 “The people are faithful to God. In the current atmosphere of the national Church, it is important to recognize this because the faith of people in Jesus Christ and Mary, Our Mother, has remained strong.”

Honor Your Mother features a six-tenths of a mile procession from Immaculate Heart of Mary Parish in which groups often depict key scenes from the Juan Diego story, dance in honor of la Virgen de Guadalupe, or wear other cultural clothing with which they identify. More than 100 groups often participate including Hispanics, Filipinos, Eritreans, Polish and Korean. The Vietnamese often bring the dragon dancers.

“They start calling around August. ‘I want to make sure you don’t forget me,’” Rodriguez said, then later had a direct invitation to the onlookers and Massgoers. “But if you just want to come and experience the procession and the Mass itself, you can do that.” Honor Your Mother draws 3,000-5,000 people depending on the forecast and competing community events.

Whether Catholics position themselves within the procession or along its sidelines, Chavira sees both roles as equally important. “We cannot ignore the importance of the cultural influence and how the beauty represented there helps our faith to grow.”

It was the beauty of Mary’s image painted with rose petals on Juan Diego’s tilma that converted many of the day and into today.

Similarly, Catholics who attend Honor Your Mother are making a bold, but gentle proclamation of their faith just by their presence because the procession and Mass are outdoors. “It’s an opportunity to show the public in general that Catholics are gathering to celebrate this feast day,” Rodriguez said.

Chavira wanted to remind Catholics across the Diocese of Phoenix that Our Lady of Guadalupe is often called the “Star of the New Evangelization.” The Blessed Mother is her patroness too.

“Mary is an example of an evangelist and has a special historical link with the people living in the Americas,” she said.