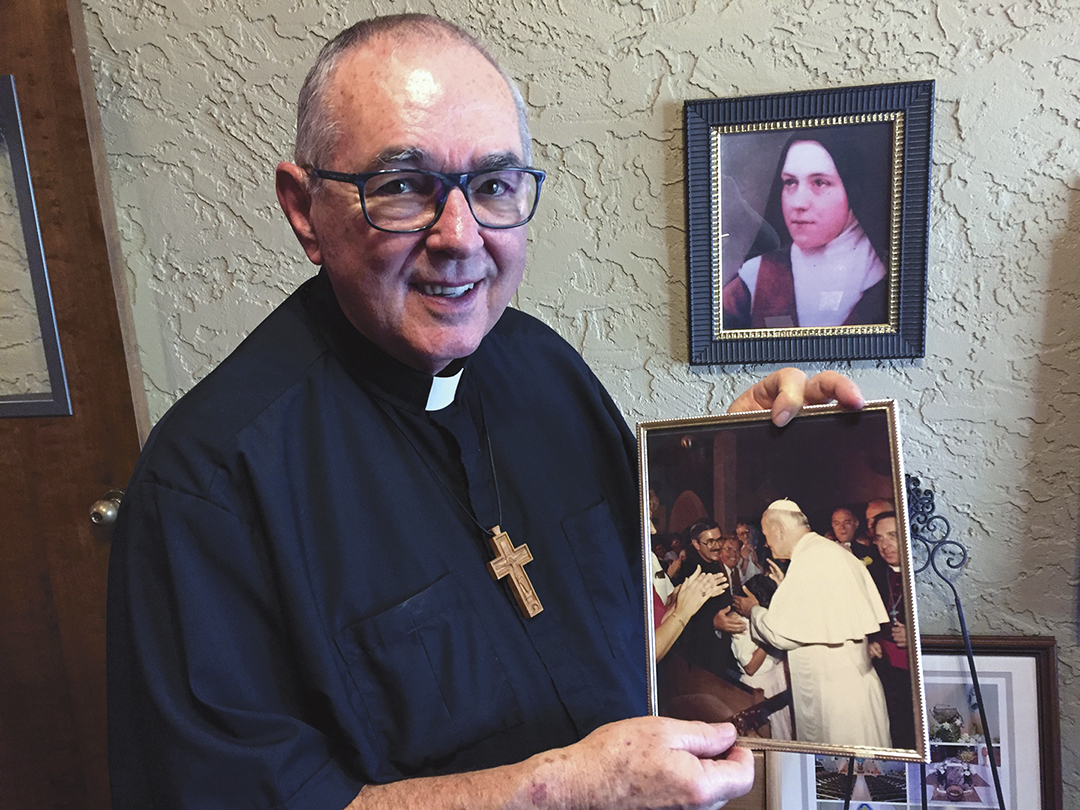 The one-time Gilbert and Scottsdale pastor who built Our Lady of Guadalupe Parish in Queen Creek was not just a spiritual father, but patriarch of his own domestic church. Fr. Lorig served as an Episcopal priest in Nogales, Arizona where he once lived with his wife and four children — including twin girls.

He discovered St. Thérèse of Lisieux and would later help sisters serving in her name. Fr. Lorig entered the Church in 1979. It was a five-year process to become a Catholic priest, one that finally got the all-clear a year to the day following his bargain with the Blessed Mother. It was a bargain made in front of the tilma bearing the image of Our Lady of Guadalupe in Mexico City.

“If you get me ordained, I will serve you the rest of my life,” Fr. Lorig said in a 2016 article highlighting his retirement.

It was a promise fulfilled in a multitude of ways since his 1984 ordination. Fr. Lorig served in a diocese whose patronage is under Our Lady of Guadalupe and was the first administrator of Our Lady of Guadalupe Parish in Queen Creek where he oversaw building of a church and hall in 1988. Its dedication date: the parish’s feast day.

As both a priest and a dad, Fr. Lorig lived to see the early stages of a Jubilee Year of the Family throughout the Diocese of Phoenix and left a four-part “Spirituality in Parenting: Building a Temple in the Hearts of Our Children” among four DVDs he released for Catholics. Another led Catholics in praying the Divine Mercy Chaplet, a topic close to his heart. He retired on the final day of the global Year of Mercy.

Fr. Billy Kosco, pastor of St. Henry Parish in Buckeye, served under Fr. Lorig at St. Anne Parish in Gilbert 2002-2004. He complimented his former pastor’s building up of the parish physically and spiritually to foster an authentic experience of the faith.

“He turned the parish into a real spiritual powerhouse,” Fr. Kosco said. “Mary and the saints were his two big things, I think.” Fr. Lorig taught special classes on it at the parish and spoke at Marian conferences nationwide.

He will be known at St. Anne’s as the pastor who helped the Carmelite Missionaries of St. Therese of the Child Jesus both locally and in their native Puebla, Mexico. He helped spearhead efforts to raise funds to complete a monastery in Mexico in 2002. That was three years after some of the Carmelite sisters began serving at St. Anne and leading its growing Hispanic ministries.

Fr. Lorig also left fond memories among high school students. He taught for seven years including at Seton Catholic Preparatory in Chandler, converted his own office at St. Anne into the parish’s perpetual Adoration chapel and oversaw building of the present church. The priest once served at Gilbert’s nearby St. Thomas the Apostle Byzantine Church, too.

A health clinic he opened for children at the border near Nogales still thrives today, according to his official obituary. He is survived by his wife, Nancy; sons Michael and David, daughters Amy Steward and Heather James; grandchildren and other family.