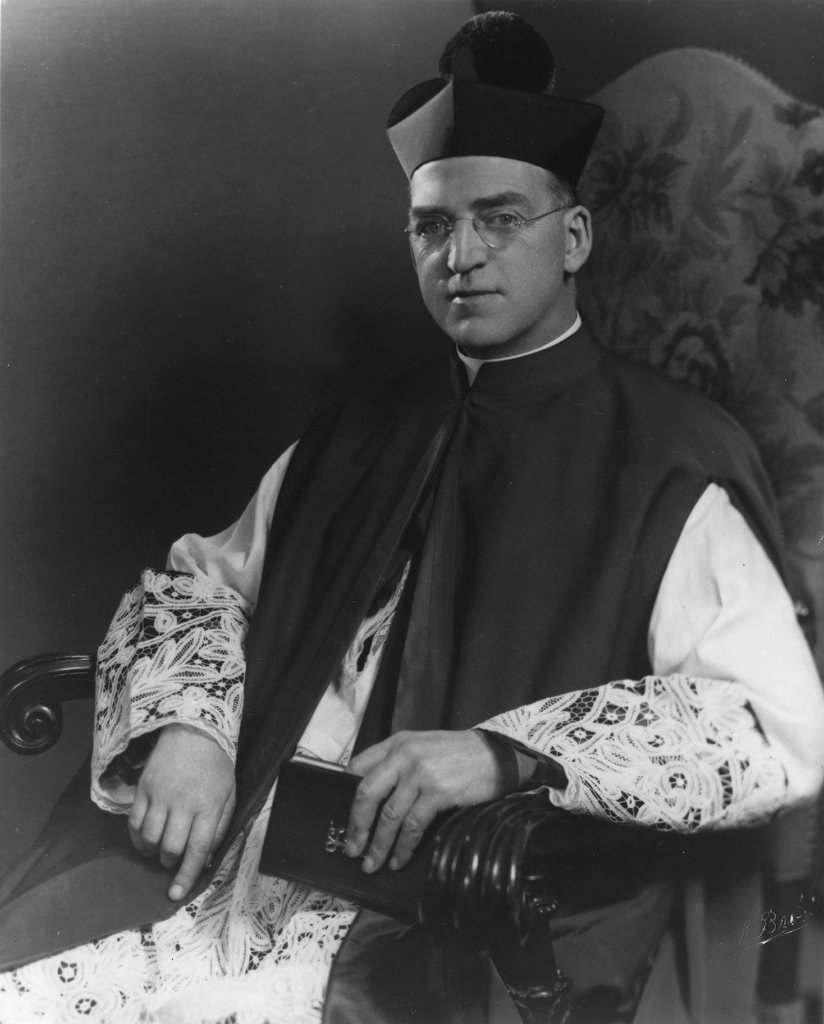 Fr. Flanagan is most famous for founding Boys Town, an orphanage for boys that grew into a major provider for at-risk children and families. Known for his phrase, “There’s no such thing as a bad boy,” Msgr. Edward Flanagan is most famous for founding Boys Town that served as a home for at-risk boys. He was born July 13, 1886 in Leabeg, near Ballymoe, Ireland, Edward Flanagan emigrated to the U.S. in 1904 and was ordained for what was then the Diocese of Omaha July 26, 1912.

After working with the homeless of Omaha for a year, he determined that the root causes that lead to homelessness need to be addressed at the youth level. With a borrowed $90 and five boys, he started what would come be known as Boys Town in 1917.

Fr. Flanagan didn’t discriminate among the boys who would be accepted at Boys Town. All races and religions were welcome. “Who am I that I should think that Christ, when he died on Calvary, died only for the Catholics living on millionaire row and white Catholics at that,” he was quoted as saying in a 1945 letter to Jesuit Fr. J.E. Coogan in Detroit.

He believed that a key to transitioning the youth in his charge into productive citizens was to allow them to participate in the civic process.

By the end of 1921, the home relocated to Overlook Farm just outside of Omaha. The unincorporated land that Boys’ Town sat on was eventually recognized as a village by the state of Nebraska, and to this day the youth elect their own mayors to represent the village.

His ministry reached such success, that it was duplicated throughout the country, and he was renowned as an expert in childhood development. Through all this, however, he maintained a steady prayer life and urged the boys in his charge to do the same, telling them that prayer was the “only certain method of obtaining help and strength,” in the September 1930 edition of Father Flanagan’s Boys’ Home Journal. “If you form the habit of prayer, you will find that it is a refreshing balm to your troubled hearts and minds, and a great consolation and help in time of trouble and temptation.

Fr. Peter Dunne, a young priest who was assigned to serve under Fr. Flanagan, recalled in James Ivey’s “Father Flanagan’s Boys’ Home” that his mentor “enjoyed prayer. He felt a contemplative life strengthened what was already there.” That prayer life, Fr. Dunne said, is what sustained the Irish priest in all of his activities.

His life and cause were captured on screen in the Oscar-winning 1938 film “Boys Town” starring Spencer Tracy as the priest and a young Mickey Rooney as one of his boys. Tracy later donated the award to Fr. Flanagan and his community because it was the priest’s work that won the award.

After World War II, President Harry S. Truman tasked Fr. Flanagan with traveling the world to investigate the need for aid to war orphans, touring East Asia and Europe. While in Berlin, he died May 15, 1948 of a heart attack.

His cause was formally opened by the Archdiocese of Omaha in 2012, making him a Servant of God. *While Servants of God don’t have formal feast days, this is the anniversary of when Fr. Flanagan entered eternal life.

The archdiocesan phase of the investigation ended with a June 18, 2015, Mass celebrated by Archbishop George J. Lucas. The positio, or collection of documents to be presented to the Congregation for the Causes of Saints, was formally sealed. If the findings are accepted, recognizing Fr. Flanagan’s heroic virtues, he will be declared “venerable.”

In his homily, Archbishop Lucas offered Fr. Flanagan as an example for archdiocesan priests, reported the archdiocesan newspaper, the Catholic Voice. They should imitate him and entrust themselves to God to grow in grace and holiness, depend on the intercession of the Blessed Virgin Mary and develop “a heart for the poor” and others in need, Archbishop Lucas said.