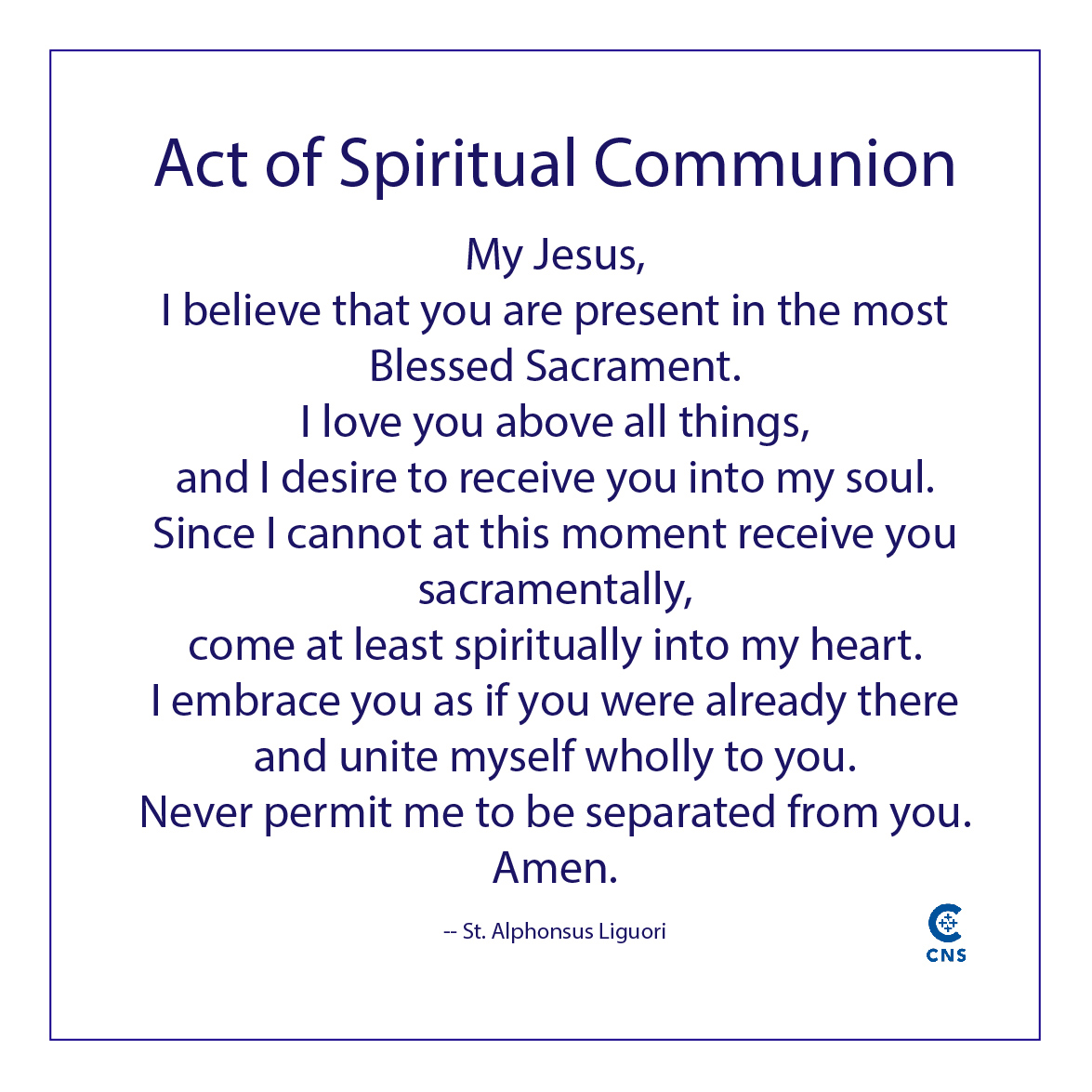 Even during a pandemic, Sunday is still the Lord’s Day. The faithful seeking to unite themselves in the sacrificial Mass without being physically present can still unite their hearts and minds to Jesus and the Universal Church. It’s called Spiritual Communion.

In an article published online by “Catholic Exchange,” Spiritual Communion is defined as being “… of value to anyone who desires a deeper union with Christ. It can be made at any time of the day or night. It is especially appropriate for those who find themselves unable to physically receive the Eucharist.”

Fr. Dan McBride, pastor of St. Mary Parish in Chandler, who also televises the Spanish Mass on ESNE 41.3 from his parish, said Spiritual Communion is a desire to unite one’s heart to Jesus.

“A Spiritual Communion is when you have that moment you recognize you are hungry for Jesus Christ, and you can’t physically get to church and receive the Real Presence in the Body and the Blood.”

Watching a live televised Mass, a prerecorded Mass, or a Mass on other social media platforms like YouTube or Instagram or listening on the radio, is available, especially to the homebound and imprisoned.

“It’s different than receiving in a church or in the hospital from an extraordinary minister of Holy Communion, but it is definitely a moment of grace because you are hungering for God, and He’s going to bring you grace when you’re receptive to that.”

Mary Gibson, a parishioner at St. Thomas the Apostle and manager of the gift and book shop, said although some Catholics aren’t familiar with it while following a Mass on TV, a computer or the radio, “they are still doing Spiritual Communion in their own way. The very fact they have the Mass on, Jesus is going to recognize they are doing a Spiritual Communion.”

Anytime Catholics are unable to receive the Eucharist, they can make an act of Spiritual Communion. Although there are different versions of the Spiritual Communion prayer, one of the most popular was written by St. Alphonsus of Liguori in the 1700s (see sidebar).

In an article published by Catholic News Service, Pope Francis said that “United to Christ we are never alone, but instead form one body, of which He is the head. It is a union that is nourished with prayer and also with Spiritual Communion in the Eucharist, a practice that is recommended when it isn’t possible to receive the sacrament.”

Pastors of every church celebrate a daily Mass, attended by the communion of saints. Fr. McBride said because of the power of God, the sacraments do what they say they do.

“When we talk about a word like efficacious,” he said, Spiritual Communion has an effect. “Someone watching Mass 10 hours later will receive grace based on the movement through the homily, Scriptures and watching the sacrifice of the Mass,” he said, adding, “Five years later, someone may watch it and their heart is moved. God uses any possible means to speak to His people; so, the social media is a powerful tool for people to connect with God when they can’t physically be in church for Mass.”

During this time of quarantine, Casey Whitehead, a parishioner of Mater Misericordiae Parish in Phoenix — a personal parish for those with a desire to attend Mass in the Extraordinary Form, or traditional Latin Mass, is making the most of her personal prayer time and also reaching out to local nonprofits in need of supplies. Once she orders items on Amazon, they are shipped directly to the organizations.

“He holds the poor so close to His heart, and His suffering is not going to waste,” Whitehead said. “People need to help others if they can. Every day is an invitation to trust. We should at least pray. Prayer is free.”

Fr. McBride said he hopes the faithful find “a powerful appreciation of the freedom we have that we sometimes take for granted in being able to walk into Mass and receive Holy Communion.”

Tori Miller, a parishioner of St. Thomas the Apostle, said it’s a blessing having extra time in prayer, time with family and time for outward acts of service and love.

“If you are living a life of generosity, selflessness and humility, then you’re cultivating a life of virtue, which enables you to receive God’s grace more completely.”

Miller said she is particularly struck by one line in the prayer by St. Alphonsus, “‘Never permit me to be separated from you’” — that’s the pain of what a lot of people are feeling. “They are feeling this heartache and separation, but in reality when you make that prayer — ask and you shall receive — He will absolutely unite Himself to you. He always wants to dwell in us.”

Miller said even though it’s difficult for the faithful to comprehend the world events and their effects, “He will bring good out of this, for sure, and we will experience a greater longing for the Eucharist.”