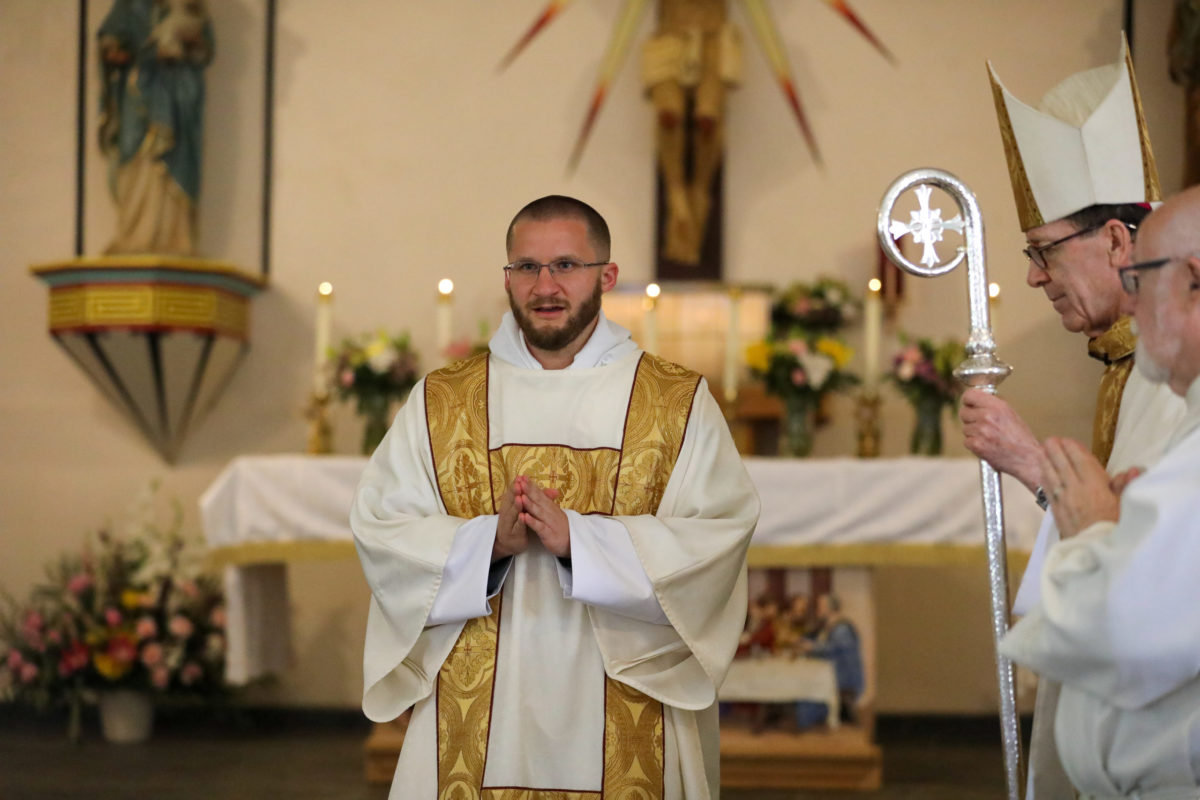 Growing up in Canonsburg, Pa., a small town south of Pittsburgh, Brother John of the Cross, whose father was a teacher, used to attend daily Mass on summer mornings. “My parents, Mike and Patty, have been married for 38 years. We grew up in the same house my whole life,” Brother John of the Cross said.

After graduating from Catholic high school, he attended St. Vincent College, where he studied mathematics and played on the tennis team.

But it turned out that straight As and a powerful presence on the tennis court weren’t quite as fulfilling as he had anticipated.

“I was just not very happy. I realized I hadn’t asked God ever what He wanted me to do with my life and pretty much as soon as I started asking that question, I felt like He wanted me to be a priest.”

That clear line of communication with God wasn’t something that just popped up in his life. His mother fostered it early on, insisting he spend 20 minutes a day in prayer as he was growing up.

It was a maternal mandate he carried out.

“I was always praying, so it felt like I could hear the voice of God,” Brother John of the Cross said. “I felt like God’s voice told me I’d be happiest and that He wanted me to be a priest. I just very quickly had a very solid sense of that.”

In some ways, his parents were surprised when he told them he felt called to the priesthood, but in another sense, it seemed only natural.

“I always felt that was a possibility for him,” Patty said, adding that her son was always interested in the liturgy.

“He was a very good altar server. He always helped Father with exposition and benediction and stuff like that,” Patty said.

Brother John of the Cross left St. Vincent College and entered St. Paul’s Seminary in Pittsburgh, taking classes at Duquesne University. He spent two years there, earning a degree in philosophy in 2016, about when the idea of becoming a religious order priest arose.

“I had considered some religious communities before entering religious life, and I never really felt peace with them,” Brother John of the Cross said. Around that same time, a community of men who would eventually become the Franciscan Friars of the Holy Spirit moved to Phoenix.

As he sat in the diocesan seminary chapel, praying and pondering about the possibility of religious life, a realization dawned on him: He had peace as he contemplated joining a religious community.

“Essentially, I wanted to live in a place, which had a more communal life than I could have as a diocesan priest. I wanted to have something that was more focused on prayer, and I wanted a group that was open to the gifts of the Holy Spirit.”

Joining the Franciscan Friars of the Holy Spirit

His novitiate with the Franciscan Friars of the Holy Spirit included a novitiate period. “It’s basically like boot camp. We prayed over 30 hours a week, and we did lots of manual labor and read great books,” Brother John of the Cross said. There was no access to the internet and calls home were limited to once every two weeks. All of that took place at the community’s mother house at St. John the Baptist Mission on the Gila River Indian Reservation.

Founded by five priests and two religious brothers, the Franciscan Friars of the Holy
Spirit were established in the Diocese of Phoenix in July of 2016 with Bishop Thomas J. Olmsted as their superior. It was he who chose Brother John of the Cross’ religious name.

“We make a list of three names and then Bishop Olmsted picks, but he can also pick one that’s not on the list if he wants to,” Brother John of the Cross said, adding that he chose the name of the 16th century Carmelite, who helped reform religious life.

“He suffered tremendously, but the love of God shone forth in everything that he did,” Brother John said.

“People were really impacted and affected by that. He also wanted union with God above anything else, and that’s what I want, too.”

“The Mass is very important to us, and to realize that it’s my son who’s going to be a priest bringing Christ to the people — it’s overwhelming,” Patty said.

“The hardest part is how far away he is, being in Phoenix, but even with that, I have a great deal of peace.”

For his part, Brother John of the Cross is counting the days until he’ll celebrate Mass for the first time.

“The Eucharist is very central to my life, and so being able to say Mass is going to
be huge.”