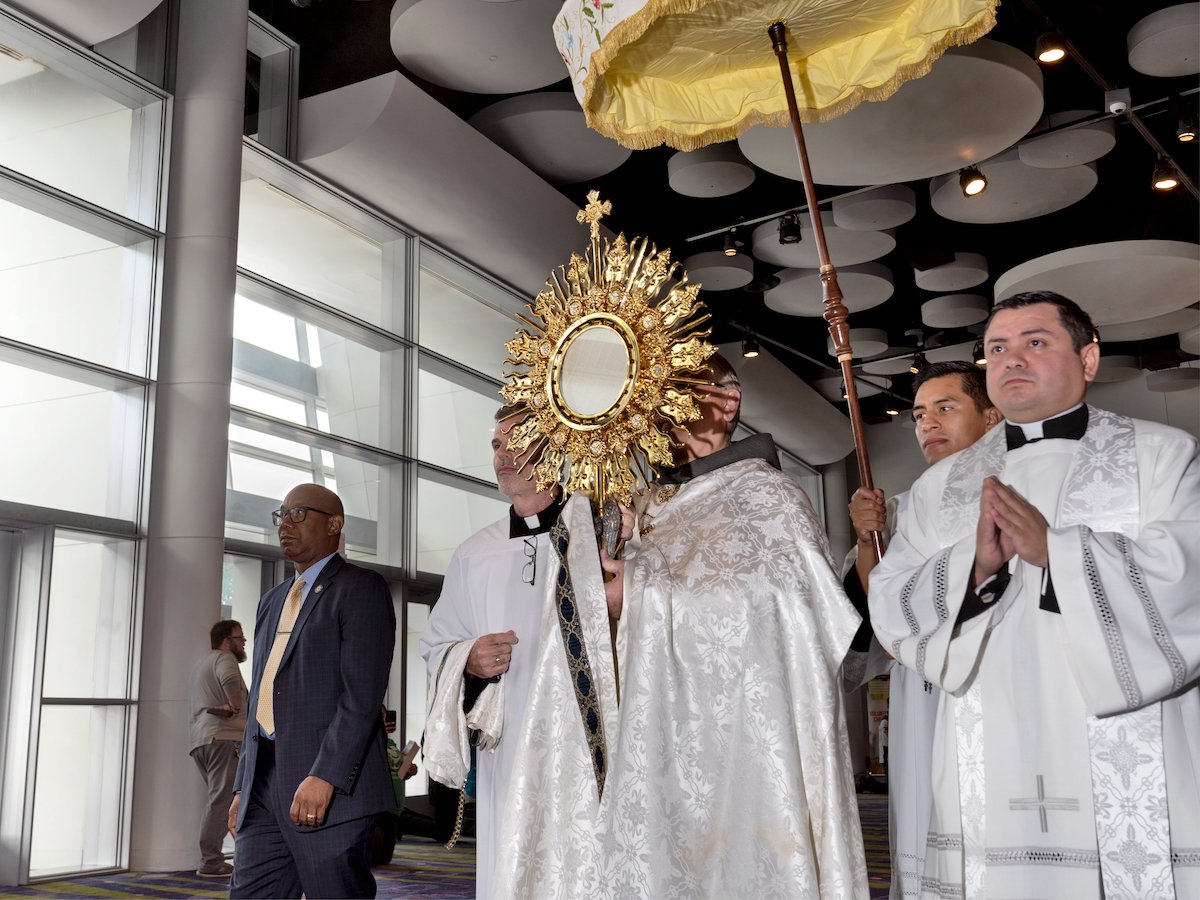 ST. PAUL, Minn. (CNS) –- Following 10 a.m. Mass June 19, hundreds of people streamed out of the Cathedral of St. Paul’s front doors and down its grand stone staircase behind a canopy carried over a monstrance bearing the body of Christ.

The procession wound slowly around the cathedral, with a brief period of adoration and a simple benediction in its courtyard before a bronze statue of Our Lady of Guadalupe, before returning to the stairs, where Archbishop Bernard A. Hebda of St. Paul and Minneapolis held the monstrance aloft to bless the Twin Cities.

The procession marked the Solemnity of the Body and Blood of Christ, also known as the feast of Corpus Christi, as well as the nationwide launch of the National Eucharistic Revival, a three-year initiative of the U.S. Conference of Catholic Bishops to revitalize Catholics’ understanding of and love for Jesus in the Eucharist.

“It’s a remembrance of what Christ left us for the journey,” cathedral parishioner Jim Smith said of the Eucharist and the importance of the procession that day. “It’s something that people go to — they go to him. That’s critically important.”

Bearing the procession canopy, formally known as a “baldacchino,” were four members of the Vietnamese Eucharistic Youth Movement at St. Anne-St. Joseph Hien in Minneapolis. Among them were Kathy Trinh, 29, and Toan Chu, 30, who married three years ago. They said bearing the canopy was an honor they felt especially privileged to undertake together.

“For us as a married couple, just to be physically next to the Eucharist felt like truly a blessing,” Trinh told The Catholic Spirit, the archdiocesan newspaper.

“We were definitely called to a higher purpose,” Chu added.

While processing, participants sang traditional hymns, including “Humbly We Adore Thee” and “Soul of My Savior.” After the archbishop blessed the city, they returned to the cathedral’s interior, where they adored the Eucharist, with the monstrance atop the tabernacle on the high altar, under a dome painted with a dove representing the Holy Spirit.

Following solemn benediction, many of the participants returned to the cathedral courtyard for an ice cream social, despite temperatures nearing 100 degrees.

Holding his ice cream, Father Tim Tran, parochial vicar of St. Odilia Parish in Shoreview, Minnesota, and coordinator of local efforts to promote the National Eucharistic Revival, said that the symbolism of the Eucharist under the Holy Spirit was appropriate.

“It’s very exciting to see what the Holy Spirit has in store,” he said of the Revival. “It falls on the heels of the (Archdiocesan) Synod, so it was really meaningful to me. It was like we have the Holy Spirit as the oven, with the bread and it’s baking, and we’ve got to spread the aroma around. That was what we were doing.”

Cathedral rector Father John Ubel, who carried the monstrance in the procession, also said it’s significant that the revival follows the Archdiocesan Synod, a three-year process of discernment for the needs of the local church that culminated Pentecost weekend, June 3-5.

“I have great hopes for the eucharistic revival, that we can recover some of the zeal and enthusiasm of our forbearers,” he said. “I hope that with this kickoff, that people see the power of the holy Eucharist and that it really helps renew our archdiocese, especially falling upon the synod. I think the timing is perfect.”

The Eucharist also was front and center for an estimated 15,000 Catholic faithful in College Park, Georgia, as they gathered June 17-18 for the Archdiocese of Atlanta’s 25th eucharistic congress — but its first since the COVID-19 pandemic prompted its cancellation in 2020 and 2021. Pre-pandemic event attendance had climbed as high as 30,000.

The congress returned with a roar, the traditional waving of banners and upbeat noise of drums, impromptu singing and horn-blowing of the on-foot procession attracting thousands of women, men and children.

“I am happy to be here with you,” said Atlanta Archbishop Gregory J. Hartmayer to the crowd as it broke into spontaneous applause.

After the deaths and upheaval caused by COVID-19 and the war in Ukraine, after the Buffalo, New York, racist massacre and Texas school shooting, a eucharistic revival is needed, the archbishop said.

“We need this right now. People are hurting. People need healing,” he said, again drawing applause that filled the cavernous hall at the Georgia International Convention Center. “We all need Jesus right now.”

The conference’s goal of learning, devotion and rekindling friendships is to “become a stronger body of Christ” to reach out and welcome back “the lost and the broken,” he said.

With crowds clogging the hallways and high-energy praise music, the conference had the spirit of a festival, a communal meeting of believers in various languages. This year’s theme was “Come to Me,” which coincided with the feast of Corpus Christi.

The crowd also heard from Bishop Andrew H. Cozzens of Crookston, Minnesota, chairman of the USCCB’s Committee on Evangelization and Catechesis, which is spearheading the National Eucharistic Revival. It culminates in a National Eucharistic Congress scheduled for 2024 in Indianapolis.

During a morning talk, he said the revival “begins here today.”

The bishop said the gift of the Eucharist is a sign of how Jesus “wants to provide a spiritual answer to so many of the problems and pains of our day, the struggles of our time, the great division, great pain, struggle with the culture of death.”

The sacrament opens the faithful to be transformed to take up the challenge to be a “missionary of his love, a light for our world,” he said, urging the crowd to “bring the Lord to the dark places” in need of God’s love.

On the elevated front stage, Cardinal Cupich shared his vision by connecting the resurrection of Jesus with the Eucharist.

The Eucharist is not only about the transformation of bread and wine into the blood and body of Jesus but “how people are being transformed, how each one of our lives are being changed as a result.”

“The real crisis of faith we have today is not so much about ‘What is the Eucharist?’ but what is happening in the Eucharist,” he said, as believers are “called forth, empowered and sent” to confront the world’s ills.