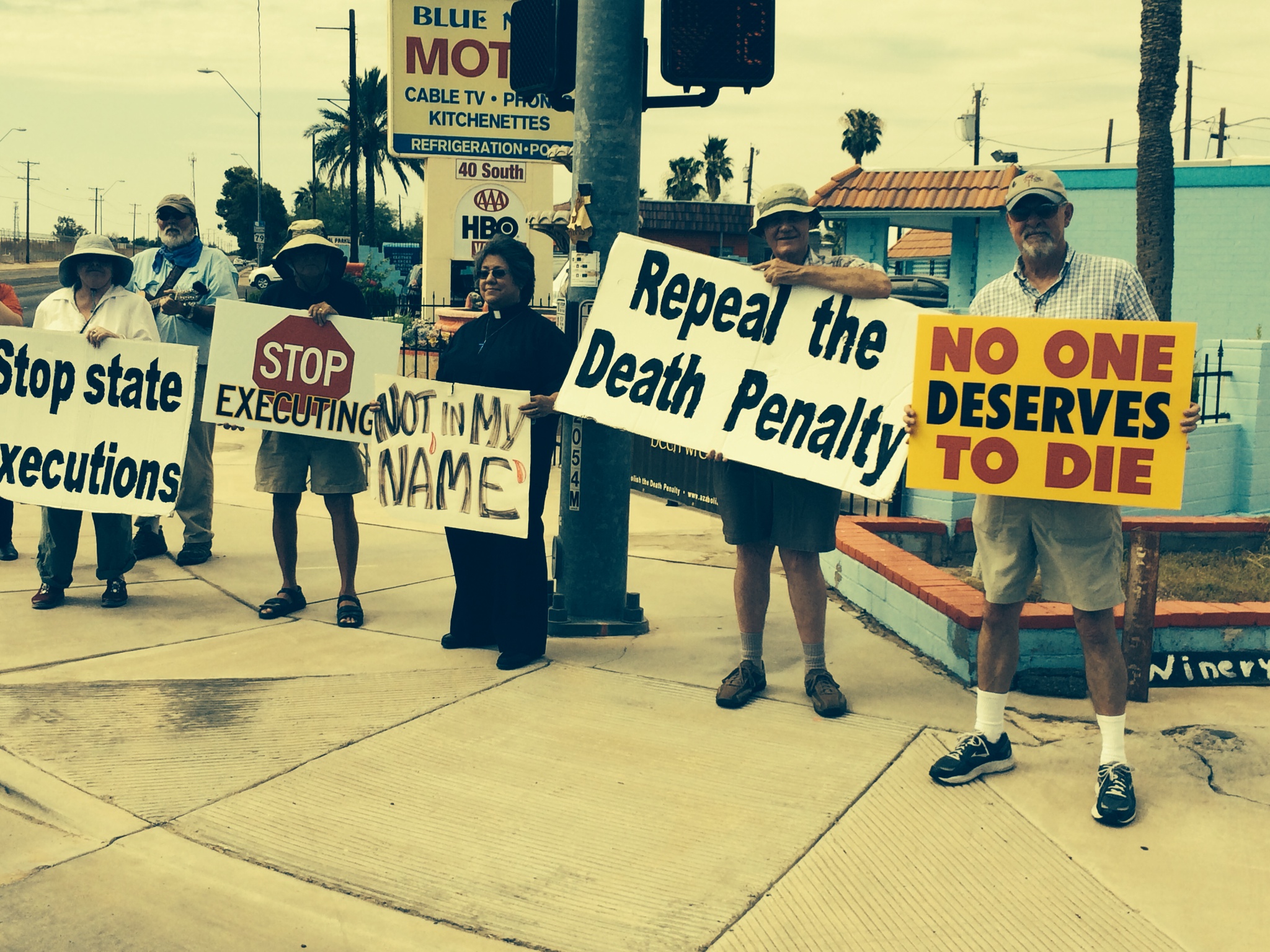 Will they or won’t they?

That was the question of the day as opponents of the death penalty stood in a sweltering sun in Florence outside the state penitentiary awaiting news about the execution of Joseph Wood.

Wood, convicted of the 1989 double murder of Debra and Eugene Dietz in Tucson, was scheduled to die July 23. The United States Supreme Court on July 21 vacated an order by the 9th Circuit Court of Appeals, clearing the way for the execution. Then, just before it was to take place, the Arizona Supreme Court issued a temporary stay. Later in the day, that same court lifted the stay and gave the go ahead for the execution.

Wood died nearly two hours after a lethal injection was administered. Critics say he gasped and snorted during his final hours, while Jeanne Brown, the sister of victim Debra Dietz who witnessed both the murder and Wood’s execution, saw things differently. Wood was merely snoring during his execution, Brown said.

According to a new poll by ABC News and the Washington Post conducted in May and June, American attitudes on capital punishment are shifting downward. The poll revealed an eight-point drop in public support for executions since 2006.

According to the Death Penalty Information Center, support for executions stood at 80 percent in 1994. The ABC News and the Washington Post poll found that 52 percent of American prefer life without parole as punishment for convicted murderers, with just 42 percent supporting the death penalty.

Arizona currently has 119 inmates on death row. Executions at the state prison in Florence began in 1910 with the hanging of Jose Lopez. Twenty-seven other individuals were hanged in subsequent years. In 1934, the state switched to lethal gas as a means of execution. From 1962 onward no executions took place, but in 1992, Arizona voters approved execution by lethal injection. So far, 37 people have been executed by the state of Arizona.

A small but vocal group gathered on the grounds of the state Capitol July 22 to voice their condemnation of the death penalty and to pray for crime victims and those whom the state plans to execute.

Kevin Heade, an attorney with the Central Arizona Lawyers Guild, called the death penalty a “moral outrage.” The manner in which the state planned to kill Wood was shrouded in secrecy, Heade said, and citizens have the right to know where the drugs used in executions come from.

The state of Arizona maintains that it cannot reveal the identity of the suppliers of the drug used in executions because death penalty opponents then pressure suppliers not to provide the drug.

“We are here to speak our unwavering opposition to state sponsored violence,” Heade said. And while he acknowledged the loss of life Wood caused, execution “doesn’t mean that we are going to achieve any kind of justice,” Heade said.

Mike Phelan, director of the office of marriage and respect life issues for the Diocese of Phoenix, addressed those gathered at the prayer vigil.

Quoting from both the Catechism of the Catholic Church and St. John Paul’s Ecclesia in America, Phelan pointed out the Church’s teaching on capital punishment.

“Today…the cases where it is absolutely necessary to do away with an offender are now very rare, even non-existent practically…This model of society bears the stamp of the culture of death, and is therefore in opposition to the Gospel message,” Phelan quoted.

While not equating the death penalty with crimes against innocent life, execution is a contribution to the culture of death, Phelan said. According to St. John Paul, “killing the guilty who are incarcerated and incapable of doing further harm is a contribution to, not a prevention of, a culture of death,” Phelan said. “Abolishing the death penalty in our country brings a culture of life closer, where [we refuse] to have killing on the table to solve our problems.”

Jean Ajamie, active at the Franciscan Renewal Center, was at the prayer vigil June 22 and explained her opposition to the death penalty.

“I feel tremendous sadness that our state does this and that I’m complicit in it because my tax dollars are used for it,” Ajamie said. “I think it’s wrong on all levels…I’m ashamed of the lessons it gives our children.”

She’s been present at many of the vigils held on the eve of executions over the years and believes strongly that the death penalty should be abolished.

“If we’re not going to do it for ourselves and our own morality, then we should at least be thinking about the lesson that it gives to our kids, because violence begets violence,” Ajamie said.

Bob Hungerford, a former Arizona state legislator, spoke to the participants in the vigil, referring to himself as the “token conservative” at the event who was once a Republican but is now a registered Independent. Conservatives, Hungerford said, wrongly think of the death penalty as a liberal issue. It’s not, he said, because state-sponsored executions violate the constitution and are not fiscally responsible. The death penalty, he said, “flies in the face of our God-given right to life.

The Founding Fathers, according to Hungerford, used the term “unalienable” right to life for a reason.