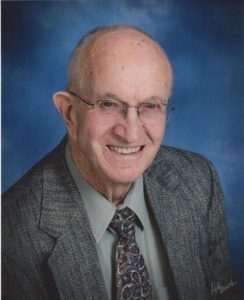 A man, who gave more than 40 years of his life to the Church via the diaconate, was called home to heaven.

Dcn. Larry Whelan, from San Francisco de Asís Parish in Flagstaff, passed away Sept. 20 following complications from a surgery. He was 81.

Dcn. Whelan was born Aug. 20, 1934 in Montana where he earned a degree in forestry and began a 30-some year career with the U.S. Forest Service. He worked in the Coconino National Forest for seven years until his retirement in 1990. Dcn. Whelan was also a Korean War veteran and a volunteer chaplain for the Flagstaff Fire Department.

His love for the faith also showed in his support of the Cursillo movement. That’s reportedly where he heard his calling for the diaconate. Dcn. Whelan went on to serve as spiritual director for dozens of Cursillo retreats in three states.

“If you just watched the man or hung around him for awhile you’d realize he was a man who was in love with his Savior. It was hard to not have it rub off on you,” said Dcn. Jeff Hartin, who knew Dcn. Whelan for 15 years. “He was good at calling other people to Christ and show them they could be better than they ever believed if they just trusted in the Lord.”

Memorial donations may be made to the Society of St. Vincent de Paul.

Dcn. Hartin and his wife admired the example of Dcn. Whelan and his wife, Barbara. Their outward expression of love was especially evident.

“When he asked me if I had ever considered the diaconate, I don’t remember what I said, but I know what I thought, ‘Yes Brother! I want to be just like you!’ The road of formation was a long one and took a lot of work, but he was always encouraging for me,” Dcn. Hartin said.

After sharing memories with other deacons from the parish since his passing, Dcn. Hartin realized his mentor and spiritual director made everyone around him feel like they had a special connection, “almost like a child feeling really loved by a parent or grandparent.”

Fr. Pat Mowrer, pastor, said there was great laughter and great tears at the funeral Mass that celebrated a life lived, but one God called complete at an unexpected time. Dcn. Whelan had a freshness about him, his pastor said and was a people person. Fr. Mowrer admired his every day example.

“The way he lived out being a deacon. He wasn’t prestigious. He was a very common man, just like our pope,” Fr. Mowrer said, noting the deacon’s commitment to live as a servant.

He was famous for saying, “I just need two minutes,” but that easily turned into 15 minutes or whatever was needed to ensure listening ears understood his message.

He’ll also miss hearing the deacon say “I love you” after giving him a blessing at Mass. Fr. Mowrer always responded, “I love you too.”