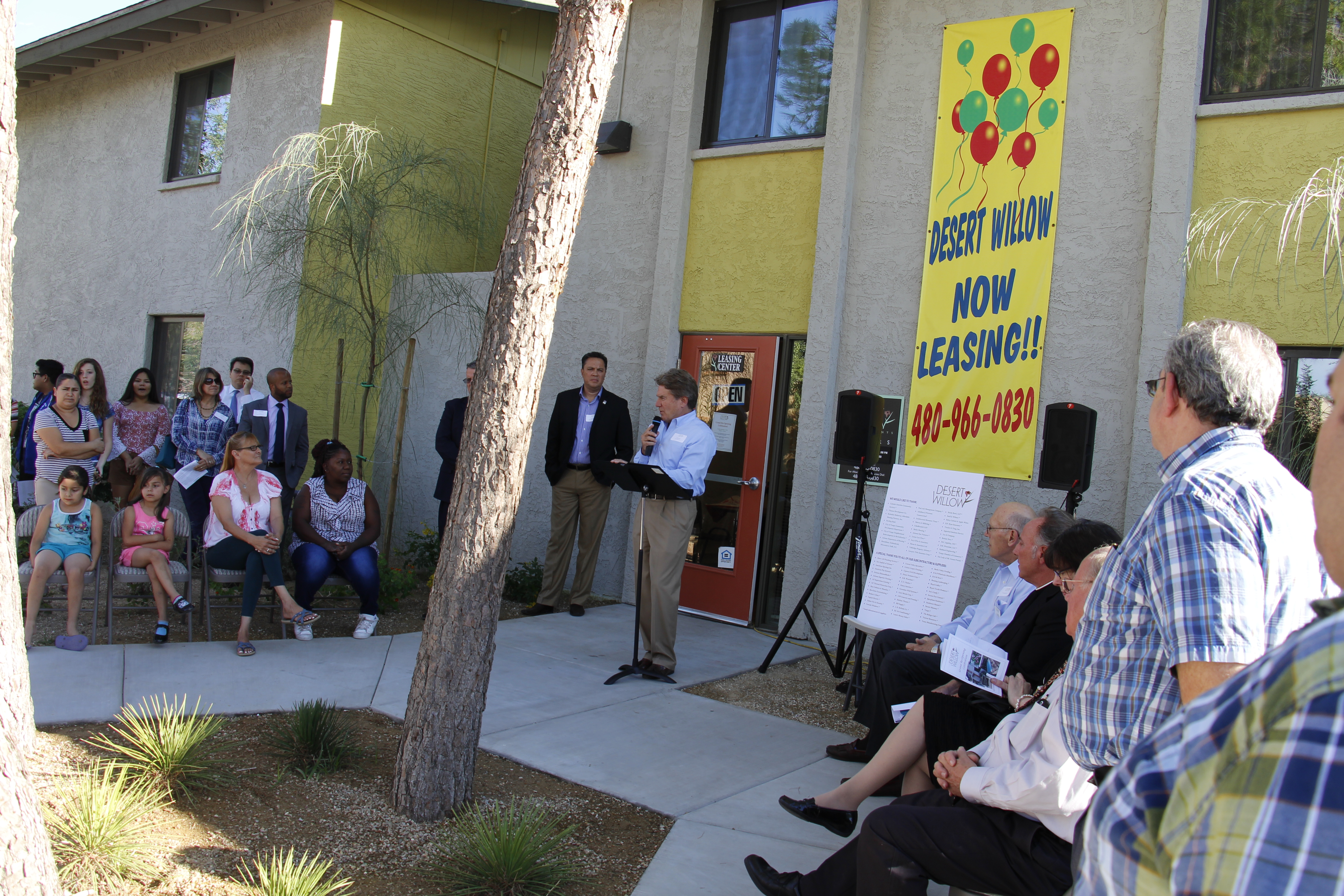 TEMPE — Their move-in dates varied, but the official “welcome home” date for 57 families and individuals living at Desert Willow lined up.

It’s a date that Catholic Charities Community Services, which spearheaded the complex’s conversion to affordable living space, will have an easy time remembering: Sept. 27, the organization’s 83rd anniversary.

“By converting as many two-bedrooms to three-bedrooms, we’ve been able to partially satisfy a real need in Tempe,” Tom Mannschreck, president and CEO of Thomas Development Company told residents and key Tempe leaders during a short program at the grand re-opening.

His company specializes in affordable housing and is owner and co-developer alongside Catholic Charities. Social services staff will remain on site indefinitely to journey with residents as they become more stable and ultimately thrive at home and in their workplace.

New opportunities for both parties are as abundant as the floor and wall space in each apartment. A Catholic Charities Resident Services Coordinator will offer daily after-school programming for the children plus regular computer lab hours, job training assistance, and supports wellness and financial education for interested residents. Community events will also be routine.

Residents eagerly modeled the first one during the grand re-opening. Three offered tours of their homes. Children explored the on-site playground and engaged with teenaged volunteers. Others enjoyed a buffet dinner.

Nothing brought the community together like the raffle drawing held throughout the evening. All activities ceased each time Desert Willow management pulled a series of winning tickets.

Even before seeing such festivities unfold, Lauren Kuby who serves on Tempe’s city council, called places like Desert Willow “a statement that affordable housing is worth the investment.”

Groundbreaking for housing veterans and their families set for Oct. 5 in Tempe

It allows those who work in Tempe a decent chance to live there too. The average two-bedroom rent is at least $200 per month less at Desert Willow than elsewhere in the 40 square-mile city, a representative from the Arizona Department of Housing said during a short ceremony in front of Desert Willow’s doors.

The renovated apartment complex models 57 of the 32,000 units nationwide that Catholic Charities has a hand in. That includes 188 units locally with another 85 on the horizon.

“I love it here because it’s really kid-friendly,” resident Lynette Anderson told a small crowd at the grand re-opening. The mother of a 9-year-old and toddler has lived in four other apartment complexes. She noted differences at Desert Willow: namely indoor and outdoor activities for her kids.

Steve Capobres, vice president of business development at Catholic Charities, who initiates the communities, described the grand re-opening as a time of thankfulness. The list of companies and people to thank for supporting the project filled a large display board.

through Foundation for Senior Living

Similar rehab projects are getting underway at two affordable housing properties serving seniors. The Arizona Department for Housing recently awarded the Foundation for Senior Living $625,207 in low income housing tax credits. Funds will upgrade all 33 units in Kingman Heights Apartments and the 24 units that comprise nearby Amy Neal Retirement Center. Both properties are fully subsidized through Section 8.

Among the key improvements will be a redesigned community space plus roll-in showers and overall greater accessibility.