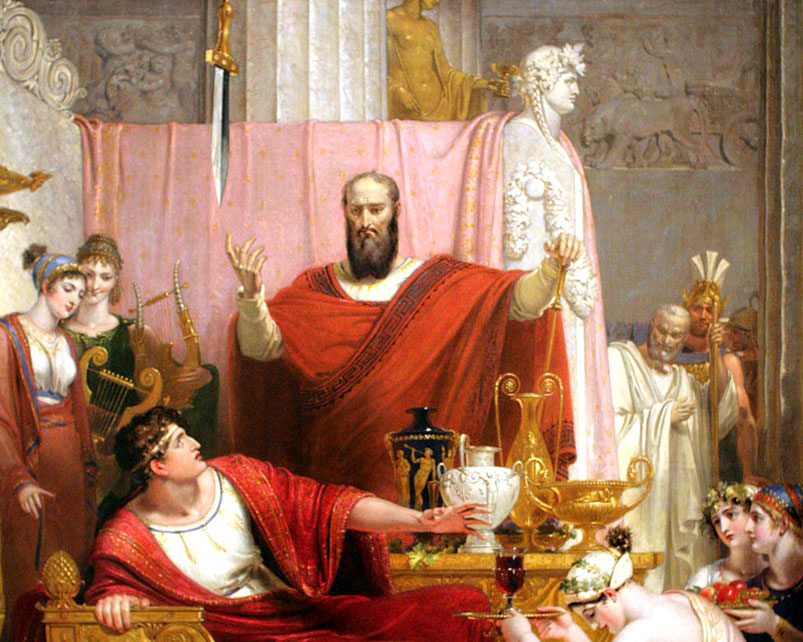 According to a Greek legend, Damocles, from the court of the tyrant ruler of Syracuse, voiced his desire to have the riches and pleasures of the king just for one day. And so, the next day, Damocles was led into the palace, and all the servants were bidden to treat him as their master. He was seated at a table in the banquet hall, and rich foods were placed before him. Nothing was wanting that could give him pleasure. There were costly wines, beautiful flowers, rare perfumes and delightful music. Reclining among soft cushions, he felt that he was the happiest man in the world. Then he chanced to raise his eyes toward the ceiling. To his horror, he saw a sharp sword, dangling above him, with its point almost touching his head, and it was hung by a single horsehair. There was danger every moment that the thin horsehair would break. Suddenly, the smile faded from Damocles’ face as he turned ashy pale. His hands trembled; he wanted no more food or wine, and he took no more delight in the music. He only longed to be out of the palace as soon as possible. As long as Damocles lived, he never again craved riches or wanted to trade places with the king.

The Sword of Damocles above us all

Death is the sword of Damocles suspended over us all. It is part of the human condition. No one escapes it. The Sword of Damocles fittingly describes the fragility of human existence and the inevitability of earthly death that sooner or later we all face. The Catechism of the Catholic Church states (CCC #1007): “Our lives are measured by time, in the course of which we change, grow old and, as with all living things on earth, death seems like the normal end of life. That aspect of death lends urgency to our lives: remembering our mortality helps us realize that we have only a limited time in which to bring our lives to fulfillment.”

To the unbeliever death is a journey into nothingness; to the believer it is the passage into eternal life. For the Christian, death is never an end; it is infinitely more than the stopping of heartbeats or the cessation of biological life. However, for those without faith in God, death is especially frightening because it means the end of all that is familiar to us.

Death is something we have never experienced, and we naturally tend to fear the unknown, thus, a natural fear of dying is embedded into our nature. Each person is tormented by pain, by the advancing deterioration of the body, and even more acutely by a dread of perpetual extinction. We are following the intuition of our heart when we abhor and reject the utter destruction and total disappearance of our own person. Desperate efforts to prolong earthly life and resist death give evidence that each person bears in himself the seed of eternal life lodged within his soul. “For God has called man and still calls him so that with his entire being he might be joined to Him in an endless sharing of a divine life beyond all corruption” (“Gaudium et Spes” 18).

A Culture that Denies Death

We live in a secular society where many see death as only loss, a total and devastating loss. Therefore, death for them is cruel because it is the end of life and all the good things that come with it. In most dictionaries, today, due to this secular perception, death is defined as the “termination of life;” and the verb “to die” is described as “to stop living.” Thus, such a bleak idea of death brings about an embarrassment and even avoidance of anything to do with death. Evidence of this denial of death surrounds us: pharmacies and supermarket shelves are filled with products designed to make us look younger; people are willing to spend an incredible amount of money on cosmetics, hair dyes, and countless other things to pretend that they are not aging, to deny the uncomfortable truth that their physical bodies are coming closer to death with every passing second that ticks by.

We also live in an age marked by advances in medicine and technology which have increased life expectancies. For many in this world, life has become more comfortable; the daily sufferings and privations which people experienced in the past have been minimized or even eliminated. Consequently, death has become for some a thing distant and even foreign. Daily life in a secular culture is seductive insofar as it lulls us away from the God of all consolation and entices us to seek passing comforts in finite things. This, in turn, leads to worldliness, and worldliness makes Heaven and being with God seem more distant, foreign and less desirable.

Christian Attitude before the Mystery of Death

The human longing to be with God is evident in many of the prayers of the Church. One of these is the ancient but still well-known prayer “Salve Regina (Hail Holy Queen)”. This prayer was composed by a blind and crippled monk, Blessed Hermann of Reichenau, about a thousand years ago. As is often the case for people with severe physical problems, life was harsh for him. But his faith led him to see more clearly than most how this earthly life is an exile from our real home with God and all the saints, especially the Virgin Mary. What kept Blessed Herman going each day was the firm conviction that his life here was a temporary exile and one day he would go home to the Father, where there are no more tears and suffering.

What, then, is the proper attitude of Christians before the mystery of death? For us who love God, death marks the beginning of life at its fullest. The Apostle Paul writes (Phil 1:21), “… to me life is Christ, and death is gain.” For whoever dies in Christ, death begins something new and wonderful. We believe this not because we have already experienced death but because we have the certainty of faith; faith makes us capable of expressing with conviction what we have not yet experienced. The source of this faith is the Lord Jesus, who has overcome death not just for Himself but for all of us. By dying, the Son of God shared our human condition to the very end and in His Resurrection, He transformed death and opened it up to sure hope for eternal life. As the Catechism says of Jesus (CCC #1009), “… despite His anguish as He faced death, He accepted it in an act of complete and free submission to His Father’s will. The obedience of Jesus has transformed the curse of death into a blessing.” Even though we Christians have such conviction by faith, death almost always remains a cause of sorrow and grief. Knowing that death is never final, we live with hope that at the end of time our souls will be reunited with our glorified and resurrected bodies in a union far more perfect than we presently have the capacity to imagine.

The Death we should fear

Thus, physical death for the devout Christian is an inevitable part of life, one that should hold no terror for us because it has become an instrument of God’s great work of redemption. On the other hand, there is an authentic death to be feared, the death of the soul through sin. In fact, the person who dies in mortal sin, without repentance, excludes himself from the Kingdom of God. This is the opposite of what God desires but He will not force anyone, against their will, to love.

The constant message of the Sacred Scriptures and especially of Jesus Christ, is that we must be constantly ready because He comes at a time we least expect. St. Anselm wrote, “Nothing is more certain than death; nothing more uncertain than its hour” (Seventh Meditation). After death, we must render an account of how we have spent our lives, how we have treated others and how we have observed God’s commandments. May our lives be always focused with the sole purpose of doing God’s will and dedicated to the service of charity, so that “among the changes of this world, our hearts may be fixed where true joys are” (Collect, 21st Sunday of Ordinary Time).