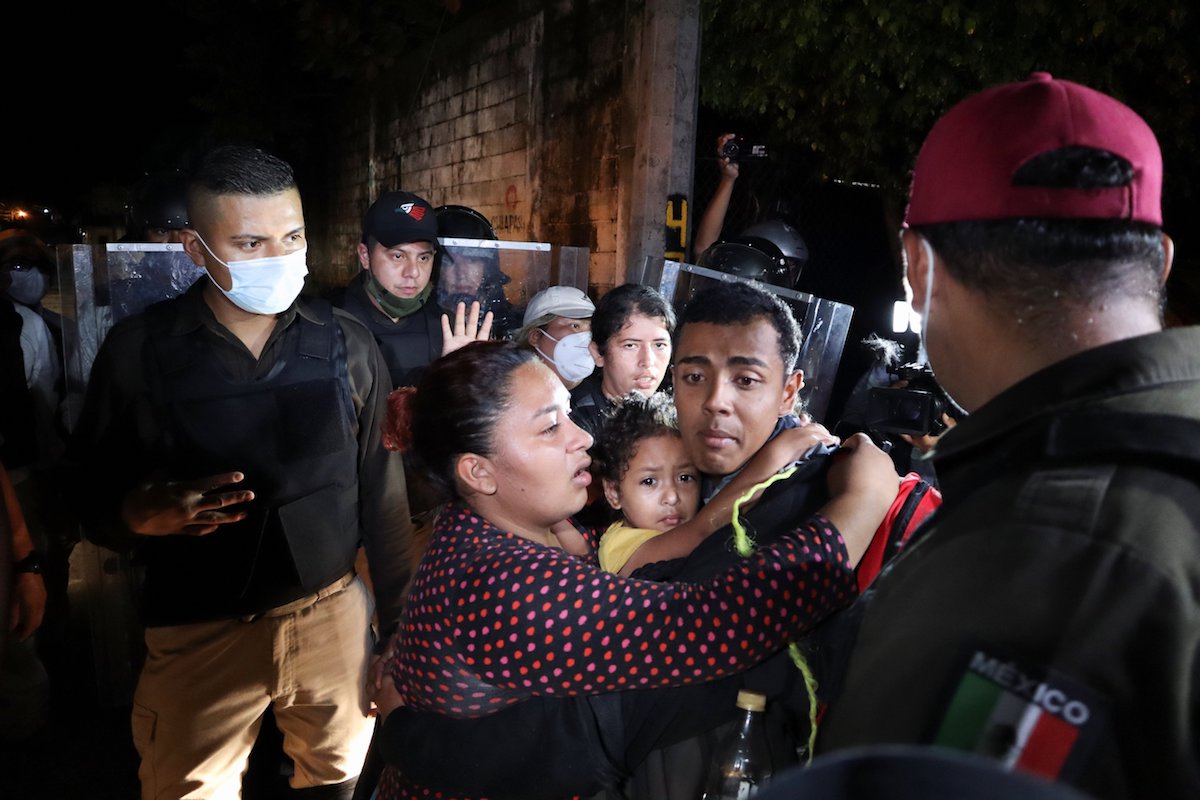 MEXICO CITY (CNS) — A Vatican official urged Mexican bishops to prioritize migrant ministries — even in dioceses without significant migrant flows — saying, “No diocese exists in Mexico that can avoid this call.”

In a Sept. 13 virtual presentation for Mexican priests and bishops, Cardinal Michael Czerny, undersecretary for migrants and refugees at the Vatican Dicastery for Promoting Integral Human Development, described a deteriorating situation for migrants traveling through the country and seeking asylum and noted, “All of Mexican territory is being impacted by emigration, transmigration, immigration, returned people or internal displacement.”

The cardinal’s call for prioritizing migrants comes as the number of migrants arriving at the U.S. southern border reaches levels not seen in two decades, while Mexico is again acting as a buffer country to stop migrants deep within its own territory.

In southern Chiapas state in recent weeks, Mexican security forces have broken up four caravans — mobilizations of migrants, including many Haitians, living in squalor as they wait for safe-passage documents or asylum claims to be processed.

On the northern border with the United States, migrants are being returned to Mexico under Title 42 — which facilitates expulsions due to health conditions — and Mexico has been asked to go along with a plan known as Remain in Mexico for keeping asylum-seekers in Mexico as their cases are heard in U.S. courts.

Cardinal Czerny called on bishops to raise awareness and organize to meet migrants’ social and spiritual needs. He also said a response could come through “instructions and messages, which illuminate congregations and attack the causes that force people to abandon their homelands.”

Mexico’s bishops have spoken out more forcefully about migration matters. Cardinal Czerny urged them to continue, saying “Especially since the governments of the region are aligning themselves with an anti-migrant policy, the voice of the church of (Central America, Mexico, the U.S., Canada and the Caribbean) can help promote solidarity, Christian fraternity in an environment that is tending to be exclusive, xenophobic.”

“The prolongation of the pandemic and the subsequent acceleration and aggravation of economic, social and political crises of various (Central American) countries, along with the hardening of U.S. and Mexico migration policies, has made the migratory dynamic in the region … increasingly generate a greater need to emigrate,” the cardinal said.

A separate document on migration released Sept. 13 by the Jesuit provinces of Mexico and Central America echoed Cardinal Czerny, a Jesuit, and outlined seven main reasons for the forced migration from the region.

The reasons included: “inequality of opportunities for full human development associated with an economic model;” disillusion toward “existing democratic processes” in a region with increasing autocracy, unpunished political corruption and drug cartels meddling in politics; a lack of social spending on the neediest people; “the influence of narcotics traffickers and arms trafficking; insecurity, militarization and “systemic human rights violations;” and climate change.

It also noted an “individualist” outlook, which seeps down from the governing and business classes to the community level and “favors a narrative created by world economic elites, where there’s an opening to commerce, but not persons.”

The Jesuit document continued, “The outward vision becomes, through forced migration … an escape valve from the social and political pressure toward local governments, and the remittances that arrive from the United States are sedatives to calm socioeconomic inequalities.”

Migrants arriving in Mexico hail from far beyond Central America, according to migrant ministry participants. The kind of migration has also changed, prompting a need for reevaluating the work of migrant ministries, said Scalabrinian Father Julio López, executive secretary of the bishops’ migrant ministry.

“The migrant drama today is much more evident and more dramatic than a few years ago, when migration was nothing more than passing through,” said Father López, who virtually attended Cardinal Czerny’s presentation.

In past years, parishes would provide meals and migrants would spend a few days, he said. There are also increasing numbers of Mexicans internally displaced due to violence; shelters are caring for them.

“Nowadays, it’s much more difficult because they’re not five or 10 people, but thousands, and they don’t stay two or three days, but they’re stranded for months.”

Mexican dioceses have cared for migrants stuck on both the northern border and the southern border with Guatemala.

The bishops’ conference has spoken out on both situations; in past years, they tended to stay silent.

“There is a greater sensitivity, a greater commitment of the bishops without a doubt,” Father López said. “The Mexican church has taken this issue to heart.”